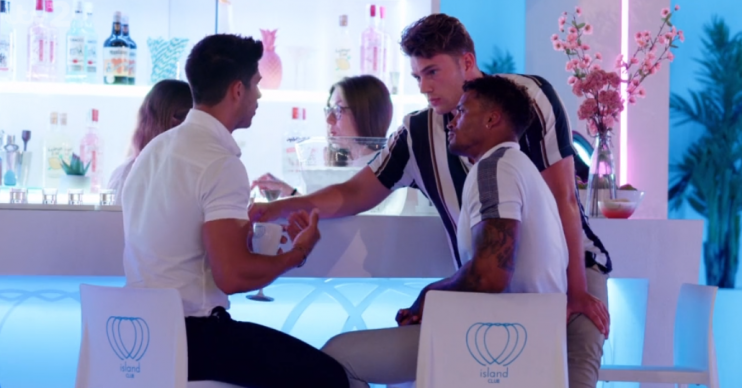 Love Island accused of being ‘staged’ as actress ‘exposed’

The couple had a major argument over the situation

Accusations of a fix exploded on social media after the latest episode of Love Island, with fans accusing producers of planting an “actress” to stir up trouble.

Viewers were convinced they’d spotted the same woman from Friday’s episode – a woman Anton Danyluk gave his number to at the supermarket – in the island club on Sunday night’s show.

In fact, several fans claimed she was a plant, with one blasting the dating show as “orchestrated nonsense”.

The episode began with Anton confessing to his partner, Belle Hassan that he’d given his number to the woman on checkout during a trip out with the lads.

Belle wasn’t impressed but she shrugged it off. They later fell out again though – having the biggest fight of the series so far – when the group went out for the evening.

The pair ended up shouting at each other across the bar, with Belle furious over Anton kissing Anna during a game earlier in the day.

But eagle-eyed fans were distracted by the barmaid serving drinks, who seemed to be the checkout woman again.

One tweeted: “Has anyone else noticed this? The bar lady is also the same lady who was the same shop assistant clearly staged.”

Has anyone else noticed this ? The bar lady is also the same lady who was the same shop assistant 🤔 clearly staged 🤣🙈 #loveisland pic.twitter.com/E9AtTdPjjg

Another wrote: “Love Island found to be using same ‘actress’ in multiple set up scenes. It’s all orchestrated nonsense.”

@Iromg Love Island round to be using same “actress” in multiple set up scenes. It’s all orchestrated nonsense pic.twitter.com/P2C9KjgGz0

A third added: “@LoveIsland well done on the editing… using the same actress within the last few eps.” One more laughed: “Changed the glasses but it’s the same person.”

Even X Factor star Jake Quickenden agreed, writing: “How they gonna use the planted shop keeper as the bar maid as well… come on #loveisland.”

@LoveIsland well done on the editing. Not only using the same actress within the last few eps but now this little blunder look at ambers pillow 🤦‍♀️🤦‍♀️🤦‍♀️🤦‍♀️ pic.twitter.com/q1gqp2TYEE

How they gonna use the planted shop keeper as the bar maid aswell… come on #loveisland pic.twitter.com/Li2WBb39aP

There has been no official response to the Twitter rumour, but The Sun Online confirms the shop woman is NOT the same woman as the brunette in glasses spotted in the club.

Fake or not, we cannot get enough of the Love Island drama. We can’t wait to see how things are between Anton and Belle on tonight’s show, 9pm on ITV2.

Do you think any of Love Island is fake? Leave us a comment on our Facebook page @EntertainmentDailyFix and let us know what you think.