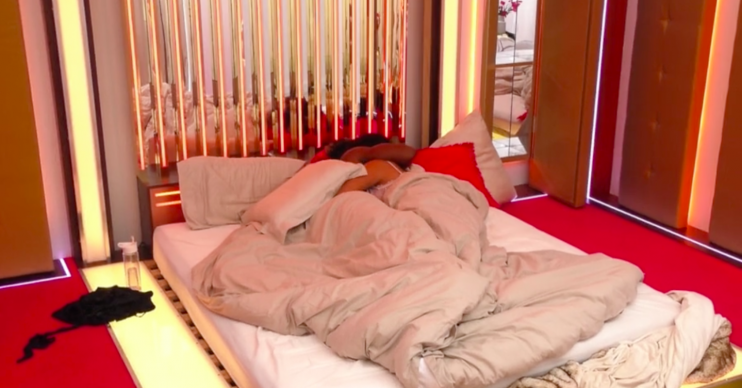 Love Island fans convinced Anna and Jordan have had sex

There were blindfolds and some sexy tickling...

Tuesday’s episode was one of the steamiest of the series so far, as the Love Island couples got closer and closer.

And viewers are divided over whether two contestants did the deed in the hideaway after they glimpsed blindfolds and a sexy striptease.

It was announced during the episode that one couple could use the infamous hideaway – a separate, and very romantic, bedroom where previous contestants have been known to have sex.

The group chose Anna Vakili and Jordan Hames to enjoy the facilities, and Anna quickly ran upstairs complaining that she didn’t have any sexy underwear.

Once in the hideaway, things got seriously intense, with Jordan blindfolding his partner, and tickling her with a feather duster.

Viewers were then treated to some cheeky shots of the couple moving under the duvet.

The next morning, Jordan commented to Anna: “Last night was unreal though, did you enjoy it?” As they left to re-join the others, the couple had a whispered chat about what they would tell the rest of the contestants.

Anna instructed: “OK, [say] we haven’t had sex but I can’t tell you guys the rest. Okay? You just say that, that’s what I’m going to say.”

Jordan replied: “Shall I just say we done bits?” Anna looked outraged, scolding: “No! Are you actually serious?” And he laughed, saying: “I’m joking! Chill out, I’m joking.”

Giggling as she told the others about her night, Anna admitted: “It was romantic, it was sexy. I wouldn’t mind every night in the hideaway.”

Read more: Katie Price divides fans with quote about being a mum

Viewers were obsessed with the scenes, taking to Twitter to speculate on whether they did or didn’t have sex.

One fan wrote: “So Anna and Jordan had sex then? #LoveIsland.” Another tweeted: “Swear if Anna & Jordan didn’t beat, that whole hideaway was a waste. You can’t blindfold & tickle with feathers & not beat- sorry.”

Others just saw the whole thing as sweet, with one commenting: “Anna & Jordan hideaway scenes were cute.” A second said: “Happy Anna & Jordan got to spend a night in the hideaway… it was finally their time.” One more added: “I do think Anna & Jordan do really like each other.”

It’s been nice seeing a return to the romance after a controversial week of evictions and fights.

Are you a fan of Anna and Jordan? Leave us a comment on our Facebook page @EntertainmentDailyFix and let us know what you think.