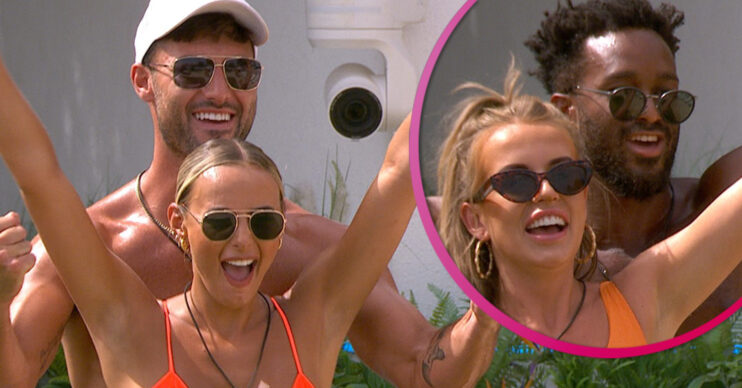 Love Island 2021: Meet the Islanders’ family members ahead of ‘meet the parents’ episode

It's something we're all waiting for!

It’s something that Love Island 2021 fans are looking forward to – the infamous ‘meet the parents’ episode.

With the end in sight for the Islanders, crunch time is fast approaching as they prepare to meet their other half’s family members.

At the end of last night’s episode (August 20), contestant Millie was seen receiving a text showing her parents heading in.

Covid-19 vaccine passports and travel restriction changes to Majorca mean it is possible for any double jabbed parents to fly over to the sunny island.

That means some of the series’ most shocking moments, such as Faye’s explosive row with Teddy and Toby, Liam and Tyler’s wandering eyes could very soon be the subject of a face-to-face showdown with their significant other’s family.

But who are the parents we could see strutting into the firepit very soon? Let us take a look!

Millie and Liam hit the rocks when he snogged Casa Amor babe Lillie. The strapping Welsh hunk did come back to the villa empty handed as he chose his long-term connection with Millie over the fling. But there was plenty of tears and hurt on both sides before they got things back on track.

Millie’s dad Rob Court has very vocally supported his daughter the whole way through her journey on his social media.

When events with Liam unfolded he wrote: “I wanted to dive into the TV tonight and just cuddle my girl real tight. It will be OK darling.”

Rob is a very talented glassblower who has been making neon glass artwork since the ’80s.

Meanwhile, Liam appears to have a very close bond with his mum Donna. While she hasn’t had anything to say about his Love Island journey just yet, it’s pretty clear from his Instagram that they’re close.

She will no doubt want to speak up for her son if he comes under fire.

Not much is known about Teddy’s family just yet, aside from his brother featuring on his Instagram. However, Faye’s loved ones have already experienced the harder side to fame.

Following her hard to watch falling out with Teddy over Casa Amor, they acted to protect Faye from the public backlash.

As well as limiting all comments and messages allowed through to the account they made a brief statement.

The post on her Instagram page read: “While we don’t want to comment on the events of the show, we ask everyone to remember: You are watching a highly edited TV show which is created for entertainment. You can never see the full picture.

“Faye is human. She may not always get things right. There are human beings managing the Islander’s social media pages who will be seriously affected by your comments.”

Faye has a sister called Jo, who has appeared on Love Island: Aftersun so she may enter the villa.

Kaz is a powerful presence on Instagram, with influencer status long before she entered the villa. Both her mum and sister are regularly seen on her account and it’s those two we can expect to see in the villa.

The pair already appeared on Aftersun last month and her mum admitted she couldn’t be more “proud” of Kaz.

What they will make of her rekindled romance with Tyler however remains to be seen.

Tyler, meanwhile, could face some stern words from his dad for his lack of commitment to just one woman when he entered the villa.

He’s already joked on Instagram about ignoring his father’s requests for grandchildren while sharing snaps with him.

Tyler wrote: “Dad: So Ty, you know I’m ready for some grandchildren… Me: Dad the camera’s over there.”

Toby, Toby, Toby… What a journey this boy has been on.

His mum Victoria and sister Shauna also appeared on Aftersun a few weeks ago to chat about his villa experience.

And despite his romantic ups and downs and trouble deciding which lovely Islander was the girl for him, his mum admitted loving seeing him come out of his shell.

She said: “For the first two weeks it was beautiful. It was slow and it was easy. Now I’m seeing Toby come out. He’s the fun Toby.

“For the first two weeks he was under the cover, under the radar. Now we’ll see the laughs come out. I want to see that boy.”

Not much is known about Chloe’s family but she does have a very lovely sister called “Bridget” who could well have a few burning questions for Toby over his wandering eye.

We say “Bridget” as apparently it’s a fake, internet-only name she’s using to maintain some privacy.

Which parents are you most looking forward to seeing in the Villa? Let us know by heading to our Facebook Page @EntertainmentDailyFix and leaving a comment!