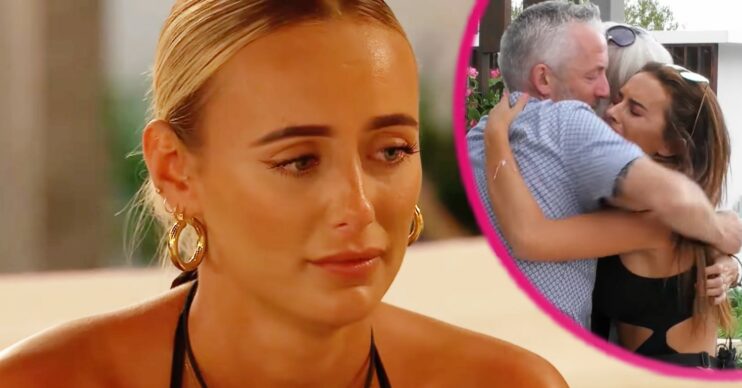 Love Island fans anticipate the ‘meet the parents’ episode but could it be the most dramatic yet?

It's set to be VERY awkward!

Love Island viewers have shared their excitement over the show’s upcoming ‘meet the parents’ episode – but when is the 2021 segment airing?

It has been a long tradition of the ITV2 dating series to invite the Islanders’ family members to Spain.

But while travel restrictions may make it difficult this year, we’re expecting some seriously awkward Zoom calls.

Love Island 2021: When is the ‘meet the parents’ episode?

ITV are yet to confirm when the highly anticipated episode will air.

However, the episode usually takes place in the week of the grand finale.

As the finale is set for Monday August 23, it will likely air sometime next week.

What should viewers expect?

The series has proven to be pretty dramatic in recent weeks.

Viewers were left stunned after Faye Winter and Teddy Soares rowed in front of the villa.

Meanwhile, Liam Readon caused a stir after setting his sights on Lillie Haynes in Casa Amor.

He then went on to reunite with Millie Court during a brutal recouping episode.

But while the lovebirds appear to be on the right track now, we can’t imagine the drama is far from their parents’ minds.

He shared: “I wanted to dive into the TV tonight and just cuddle My Girl real tight. #itwillbeokdarling.

“Mils will shed her tears and it is difficult for me to helplessly watch. But I know deep down nothing will diminish her beautiful smile long term, she is too much of a ‘Happy Soul.’

“Millie has a large loving family and a fab group of friends behind her for support. We are all so proud of her. XX”

Bring in their parents now!

Rob added: “I would also like to say… please be kind to all participants of the show with your comments online, they have feelings, families and friends too. #bekindplease.”

And fans can’t wait for Rob and Liam to finally come face-to-face.

Taking to Twitter, one viewer said: “Tbf I want Liam and Millie to get to the episodes where the parents come in, I want Millie’s dad to cuss him out.”

Another added: “Excited for the ‘meet the parents’ episode. How are Millie’s parents gonna be able to act that they approve of Liam.”

A third wrote: “Are they doing parent visits this series or just over Zoom? Kinda want to see one of Millie’s friends/family absolutely lay into Liam.”

A fourth shared: “Sorry but even if Millie and Liam work imagine meeting her parents after they’ve already seen you cheat on her and lie through your teeth on national television?”

What have Love Island fans said?

Meanwhile, others shared their excitement over Faye meeting Teddy’s family.

The couple appeared to rekindle their romance last night (August 10) after briefly splitting.

One said: “I’m waiting for the meeting the parents episode so I can hear Teddy’s side of the family’s thoughts about Faye.”

“Teddy deserves so much better. Bring in their parents now,” a second tweeted, while another joked: “I feel for Teddy’s parents if they survive to that stage. They will probably pretend to like her when they hate her more than anything.”