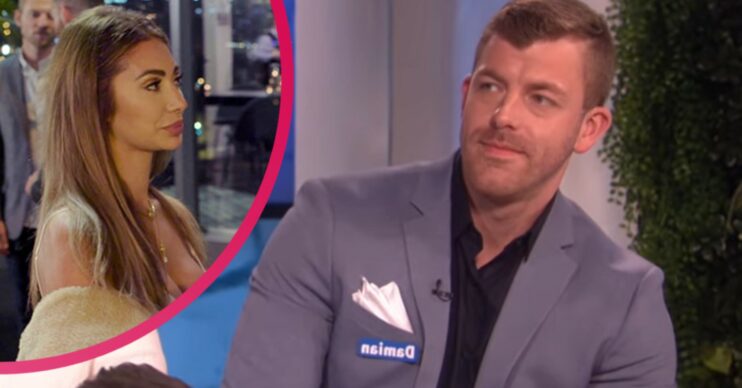 Love Is Blind: Is Damian Powers dating Francesca Farago? Why the hell is she on the show?

This is so messed up!

Love Is Blind is finally back on Netflix, but fans are baffled by the appearance of Too Hot To Handle star Francesca Farago.

Let’s take a step back and figure out exactly what happened.

Damian Powers was first pictured with Francesca last year during the height of the Covid-19 pandemic.

At the time, Damian, who is still dating Giannina Gibelli, was forced to deny romance rumours.

Did Damian Powers date Francesca Farago on Love Is Blind?

“Francesca and I are not dating or romantically involved but remain friends,” he told fans.

Damian and Francesca were also pictured linking arms together. He claims it was to “shield” her from the awaiting paparazzi outside the restaurant they were seen at.

However, when tuning in to the new episodes of Love Is Blind, things begin to not add up when it’s revealed Giannina and Damian’s relationship isn’t exactly hunky-dory.

The couple is yet to move in together and there hasn’t been another marriage proposal.

When asked if he sees himself with her for life, Damian tells his co-stars: “Not every person is going to be that 100% match.”

Seems like a pretty big red flag, right? Wait, it gets worse. Damian and Francesca go for dinner together during the episode. During their “date,” he says how “hot” she is and says he enjoys Francesca flirting with him.

“Cheers to where life takes us,” says Damian. “Is she beautiful? Yes. Is it exciting? Yes.”

Later in the episode, the Love Is Blind cast turn up to the reunion. Giannina finds herself immediately blindsided by Francesca’s appearance.

Things quickly get tense and Giannina tells her: “He’s mine.”

Damian then snaps back: “You don’t control me, you don’t tell me what to do. I can handle my own.”

What are Love Is Blind fans saying?

Fans rushed to social media to share their heartbreak for Giannina over the bizarre incident.

“Francesca, what are you doing here babe? Um… babe your ‘man’ invited her #LoveIsBlind,” ranted one viewer.

"francesca what are you doing here babe?" babe your "man" invited her… #LoveIsBlind #LoveIsBlindAftertheAltar

Jessica, honestly, deserves better. She's obviously over the whole situation and she's trying to put everything behind her. Giannina needs to move on because what Damian did was COMPLETELY wrong, in every way possible. My girl Diamond needs a real man. #LoveIsBlind #Netflix #Love

Damian is trying to gaslight Gigi. No woman would be cool with this $@!t he pulled at that party. #LoveIsBlind pic.twitter.com/EhE5NCaeZg

Read More: So who IS Jessica dating and are they Instagram official?

“Giannina needs to move on because what Damian did was COMPLETELY wrong, in every way possible,” insisted another.

Francesca ends up leaving the reunion party and tells Damian that he should have made it clear he wasn’t single.

Love Is Blind Netflix Too Hot To Handle