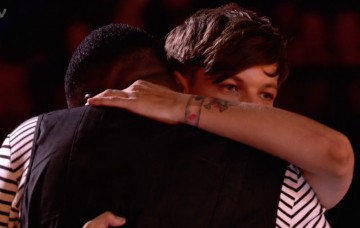 The panellist's mother Johannah died of leukaemia in 2016

X Factor judge Louis Tomlinson was brought to tears as auditioning singer J-Sol performed a tribute to his late mother.

The One Direction star, who also recently lost his mum, wept during the emotional, self-penned track, before embracing the hopeful on stage.

It brought back painful memories for Louis, whose mother Johannah died aged just 43 in 2016 following a battle with leukaemia.

Read more: Louis Tomlinson opens up about the moment he discovered his mum’s cancer was terminal

Fellow panellist Ayda Field also shed tears and shared the sudden loss of her father from a heart attack.

J-Sol’s own story struck a chord with the judges as he revealed his mum had urged him to audition for The X Factor before she passed away.

Simon Cowell thanked the 25-year-old for performing on the show and said he also still spoke to his deceased mother.

After embracing the singer, Louis told him: “I lost my mum as well. You did an amazing job.

“That’s the power of music that you can write such a beautiful song that’s touched us all on this panel.

“It was brilliant, it was moving. You’re a legend for what you’ve just done.”

Ayda added: “In 2014 I lost my father very unexpectedly.

“I will never forget how the world swallowed me up on that day when I found out.

“I just want to thank you because that was a beautiful song.”

Viewers were also swept along with the emotions and took to social media to share their admiration for Louis.

J Sol and @Louis_Tomlinson literally had me bawling my eyes out tonight. #xfactor

I Iost my father and I know that time will never heal something like that, we just have to be strong and live with it. The audition was heartbreaking, It was really hard to watch and watching Louis cry made it even more painful 😭💔.

Louis Tomlinson is the only reason ANYONE is watching #xfactor #thexfactor he’s so strong and kind. The world has not been kind to him but he gives ALL of his love for everyone else. The absolute most genuine and loving and beautiful and compassionate and humble! 💙 #ProudOfLouis pic.twitter.com/qWmeigfu87

* The X Factor continues tonight at 8pm on ITV.

What have you made of this year’s X Factor so far? Leave us a comment on our Facebook page @EntertainmentDailyFix and let us know what you think!