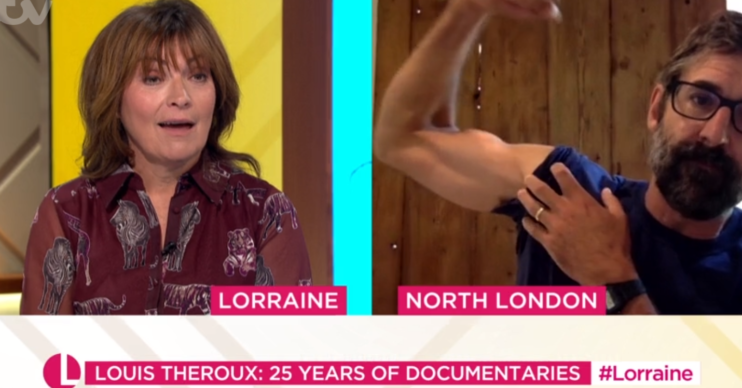 Lorraine seemed quite pleased with Louis' fitness results too

Louis Theroux left viewers stunned as he showed off his bulging arm muscles on Lorraine.

The documentary maker, 50, was interviewed from his North London home.

The married dad-of-three said he’d been working on his physique during lockdown.

He thanked Lorraine Kelly after she said his once ‘nerdy’ image was starting to change.

Louis said: “Thank you for saying I’m not nerdy anymore.

How did Louis Theroux get so ripped?

“I plead guilty to still being a bit of a nerd.”

But then he confessed to following Joe Wicks’ home workouts and showed off his biceps.

He continued: “I’ve been doing a lot of Joe Wicks in lockdown.”

And Lorraine didn’t seem to mind the view at all.

Louis explained: “It’s not about muscles. It’s about mental health.

“Muscles are a by-product.”

Lorraine agreed: “Absolutely. You can do both at the same time which is very, very good.”

Read more: Kerry Katona says she is ‘no rush’ to have a child with fiancé Ryan Mahoney

One viewer gushed: “@louistheroux just flexed his muscles on @reallorraine tv show and I have choked on my morning cuppa!!!”

And another user praised: “Louis Theroux is RIPPED #itvlorraine #lorraine.”

He also spoke about his time with Tiger King

A third user admitted: “My weird crush on this man is now out of control” and a fourth viewer proclaimed: “Had to pause and rewind and share this @louistheroux Mr Universe moment.”

Louis then went on to discuss his time with the controversial Joe Exotic (real name Joseph Schreibvogelaka) Tiger King.

Joe was heavily featured during Louis’ documentary on exotic animals being kept by private owners in the US back in 2011.

Tiger King has since become a household name after the mega hit Netflix series of the same name was released during lockdown.

Louis said: “I’m almost slightly embarrassed that I didn’t make more of it at the time.

“It was a program called America’s Most Dangerous Pets.

“I spent probably over three separate trips – the best part of maybe a week with Joe Exotic.

“Back then he had two partners…and I got to know him. Even then he would talk a lot about Carole Baskin.”

Joe is currently incarcerated in the US. Meanwhile Carole has just announced she shall compete in this year’s Dancing with the Stars in the US.