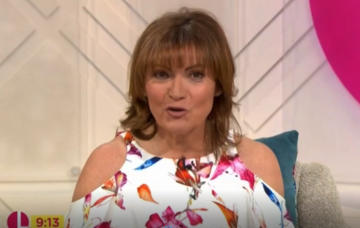 Lorraine Kelly’s co-star Mark Heyes caused a stir among Lorraine viewers on Tuesday with his choice of shirt.

Fashion expert Mark sported a light blue shirt that featured a white lace embroidery design on the front, as he presented his usual fashion segment on the show.

But the unique shirt caused so much controversy, the show chose to run a poll for viewers to vote on what they thought about it!

Mark was left speechless as he replied: “What? I honestly thought you were the fashion pack out there.”

Hitting back at the critics, Mark joked: “It was a special birthday present, so there. You’ve offended me.”

Piers Morgan even had an opinion on the shirt during Good Morning Britain.

As GMB linked to the Lorraine studio to see what was coming up on her show, Mark showcased his unique shirt as he sat alongside Lorraine.

“I nearly wore that today,” Piers said. “Went to the wardrobe, shall I go with the boring blue suit or should I go with that look.”

“Piers, honestly, I could teach you things,” Mark quipped.

“I bet you could,” Piers replied, leaving the studio in fits of laughter.

Viewers watching from home were divided over the shirt with some hating it, while others loved it.

One person tweeted: “So Mark’s horrific shirt was a birthday present! Who from – Stevie Wonder?!”

Another said, “Mark NO just NO!!!!! that shirt’s horrendous,” while a third called his outfit choice a “fashion failure.”

Others were much more complimentary of Mark’s look.

This isn’t the only time Mark’s outfit has made headlines on the show.

Earlier this year, Mark was left red-faced after accidentally splitting his trousers live on air.

He suffered the wardrobe malfunction shortly after starting his style segment and had to cover his crotch for the rest of the show.

At the start of the show, Mark got a piggyback from one of the guests, SAS: Who Dares Wins star Ant Middleton, and it seems that’s what caused the split.

After introducing a segment dedicated to a jumper worn by Meghan Markle, he told Lorraine about his accident.

“There was a huge [ripping] sound and my trousers split,” he revealed. “I’ll have to cover up with these [cue cards].”

After the segment, Lorraine, who was in hysterics, told Mark to go and get his trousers “stitched up.”

“I’m too far gone,” Mark quipped. “I’m going to have to walk around like this for the rest of the day.”