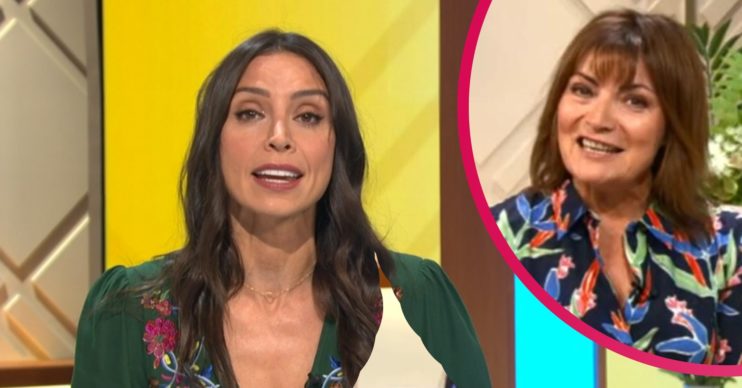 Lorraine's off for the summer

Christine Lampard has replaced Lorraine Kelly on her breakfast show as the host takes a break for the summer.

The Loose Women favourite, 41, will be presenting ITV’s Lorraine for the coming weeks.

And those who tuned in this morning (Tuesday, July 21) called for ITV to make a number of changes to the programme accordingly.

Lorraine featured on the title intro to the programme, which of course is still called Lorraine whoever is hosting.

Read more: Christine Lampard shares adorable photos of her as a baby with her dad

But some ITV viewers said they thought Lorraine should not be in the intro when it’s hosted by Christine, while others wondered why it was still named after the Scottish TV veteran.

One said on Twitter: “Take #Lorraine off the opening titles! She’s not even going to be hosting it for eight weeks ffs.”

Take Lorraine off the opening titles.

Another replied: “I agree, it should be Christine.”

Someone else tweeted: “Why’s it still called #Lorraine when she’s not even hosting it?”

I agree it should be Christine

Whys it still called #Lorraine when she’s not even hosting it pic.twitter.com/1Z0uE3ivak

As reported by What’s On TV, Christine said of her summer stint on the programme: “I am looking forward to it.

“Everything has been up in the air, I didn’t know what studio we would be in or anything like that.

“So, I was sort of on standby for anything.

“I’ve been quite relaxed about it because the Lorraine family are all very friendly and close.

“I know they’ve done a brilliant job of making it feel as normal as possible and I can’t wait to see them all.

Lorraine ‘hasn’t had a day off’

“You have to give Lorraine full credit, because she has found a way of dealing with everything and motored on as she always does.

Speaking further, Christine praised Lorraine for being “fantastic” over the last few months. She said she “hasn’t had a day off” at all, so her summer break is “very well deserved”.