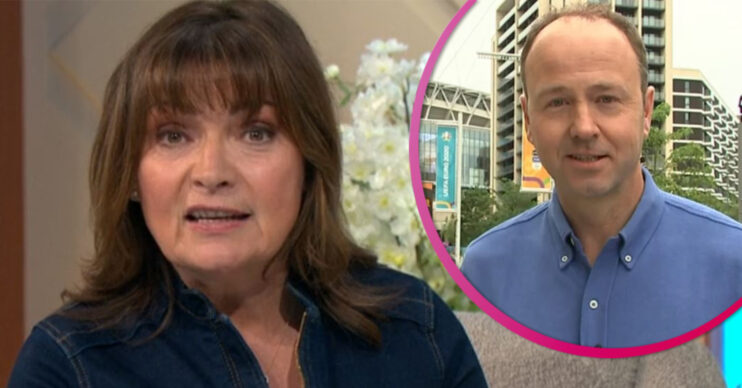 He proudly showed off a selfie with 'Jurgen Klopp'

Lorraine viewers were left in hysterics today when a reporter was caught out by a Jurgen Klopp lookalike.

On Wednesday’s episode of Lorraine, the host spoke to Jonathan Swain who attended the match at Wembley Stadium.

And he was quick to show off his selfie with who he thought was the Liverpool manager.

What did Jonathan say on Lorraine today?

Jonathan told Lorraine Kelly: “As I was going into the stadium last night, I caught up with Jurgen Klopp as well, the Liverpool manager. Of course he is German.

“He was a great sport yesterday, chatting to many of the England fans.

“Even after the match, he was on the shoulders of some England supporters, drinking a can of beer. Just here, on Wembley way.

“What a tremendous chap he is.”

Lorraine exclaimed: “I love that!”

However, there was just one problem, the chap wasn’t the footballer manager.

The fan was dressed in a Liverpool tracksuit and had a baseball cap on, what Klopp often wears, so his look was pretty convincing.

Viewers flocked to Twitter express their laughter at the gaffe.

One person said: “Hahaha as if the ITV news reporter thought the Klopp lookalike was actually Klopp.”

Hahaha as if the itv news reporter thought the klopp lookalike was actually klopp. #lorraine

Guy on #lorraine on about that Klopp lookalike being on shoulders drinking with England fans – thinking it was Klopp ??

Another laughed: “Guy on #lorraine on about that Klopp lookalike being on shoulders drinking with England fans – thinking it was Klopp??” followed by laughing face emojis.

One person tweeted Jonathan saying: “@SwainITV just seen your report on the football last night. You do realise that that was a Jurgen Klopp lookalike don’t you!?”

Last night, football fans were sent into a frenzy as England beat Germany.

The match was attended by many famous faces, including David Beckham, Ed Sheeran, Prince William and Kate Middleton.

Who’s going to tell this @lorraine reporter that it’s not actually Jürgen Klopp.

Read more: Peter Egan on Lorraine today: Actor breaks down in tears as he discusses death of wife Myra Frances

Even William and Kate’s eldest son Prince George, seven, was there alongside his parents.

Viewers loved seeing the young prince at the match, and gushed over his little suit which looked similar to the Duke of Cambridge’s.

Did you watch England’s win? Leave us a comment on our Facebook page @EntertainmentDailyFix and let us know.