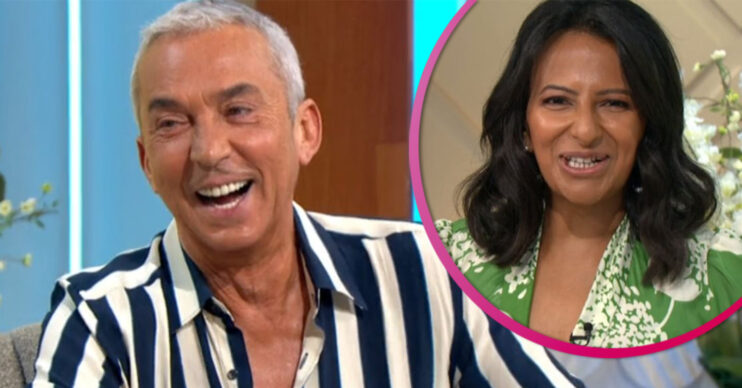 Lorraine today: Bruno Tonioli causes a stir with his shirt

We loved his look!

On Lorraine today, Bruno Tonioli caused a stir among viewers with his outfit choice.

Bruno was wearing a navy and white striped shirt, which was open to show off his gold chain, with black trousers.

What did Lorraine viewers say today about Bruno Tonioli?

And it seems viewers were distracted by his look.

One person said on Twitter: “BRUNO DOING A SIMON COWELL.”

Another quipped: “Why is Bruno only half-dressed?”

A third commented: “Put that skin away Bruno!”

Meanwhile, others loved the shirt as one said: “@BrunoTonioli nice shirt on… where did you get it from?”

Another gushed: “@BrunoTonioli You look amazing for your age, where did you get your shirt from, I want it!”

One added: “@BrunoTonioli Just watching you this morning on Lorraine, I just love your pinned striped shirt it’s beautiful.”

The series, Craig and Bruno’s Great British Road Trips, sees the pair explore some of the country’s most iconic and best loved road trips.

He admitted to stand-in host Ranvir Singh: “I was never expecting to find so much beauty in Great Britain.

“Sometimes the best things are close to your nose.”

Bruno also revealed he had to borrow thermal underwear in the latest episode – which airs tonight – when he and Craig walked up Mount Snowdon in North Wales because it was so cold.

He said: “I had to borrow some thermal underwear from the camera crew because I was shaking because I wasn’t prepared for the… all of a sudden it’s freezing cold.”

Bruno added: “Two things I don’t like – cold and heights.”