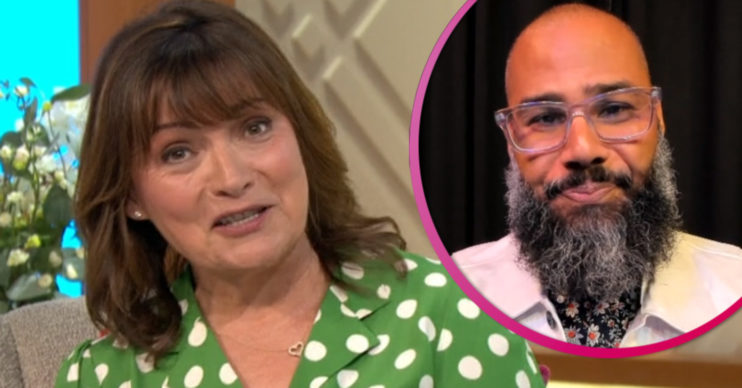 The presenter, 61, spoke with Joshua Silverstein – who dated the Duchess of Sussex when they were children – on Tuesday’s programme.

Joshua said he ‘supports’ Meghan and what she and Prince Harry are now doing since stepping back from royal life.

What did Joshua say to Lorraine Kelly today?

When asked what he thought when he found out Meghan would marry into royalty, Joshua said: “My only thought was that I hope she’s happy.

“That’s all that matters. Love is love. Meghan and I dated when we were kids and broke up before high school and we stayed friends through throughout and I would see her now and then at the church we were going to.

“I mostly stayed in contact with her mum and her mum would let me know what she was up to.”

Lorraine then asked: “I just wonder what your wife thinks of your very famous ex-girlfriend?”

Joshua replied: “Cynthia told me, ‘you just wait’ and I said, ‘no-one’s gonna care about any of this’ and I was wrong.

“My wife has been really obsessed and very much into the royal family history and the fact that now I know someone that is a part of that narrative makes her very excited.”

Joshua also said it seems Meghan’s handling criticism “well” and praised her over her Oprah interview.

At the end of the interview, Lorraine told Joshua: “I know that she’s got a Prince, I do think you’re the one that got away Joshua.”

Joshua laughed and said: “I think her and Harry make an amazing couple and I couldn’t have found anyone more amazing than my wife.

“She’s the perfect partner for me and without her I wouldn’t have my amazing three children as well.”

One person said on Twitter: “Is this interview even relevant? Why is this news? Just seems like a way to start unnecessary problems for Meghan.”

Another wrote: “Very confused as to the relevance of talking to Meghan’s first boyfriend… from when they were 13.”

One added: “Wtf is wrong with Lorraine Kelly? How she going to tell Joshua, Meghan’s boyfriend she had when she was young teenager, that he was the one that got away.

“The dude is happily married with kids as is Meghan. Embarrassing.”

Very confused as to the relevance of talking to Meghan’s first boyfriend… from when they were 13. 🤦🏿‍♀️ #Lorraine pic.twitter.com/a5YBNFmCf4

Another wrote: “How do you tell a married man he is the ‘one who got away’ the day before his high school ex-girlfriend celebrates her 3 year wedding anniversary?”

Others praised Joshua during the interview.

One said: “What a lovely man.”

Another wrote: “This guy was nice though.”