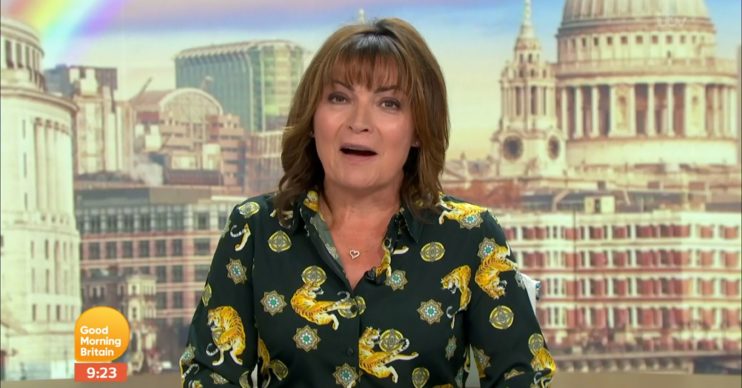 Good Morning Britain’s Lorraine Kelly was forced to interrupt Andi Peters today after he horrified viewers with a rude word.

The 60-year-old host appeared far from impressed as Andi used the the word “gongoozler” during the ITV show’s competition segment.

The word officially means “a person who enjoys watching activity on the canals of the United Kingdom”.

But Urban Dictionary explains that it can also refer to a grotesque sex act; one we can’t repeat on ED!

The term was introduced on the show by guest Gyles Brandreth, with many viewers getting in touch to complain over its alternative meaning.

Following a string of tweets, Lorraine warned Andi and told him it was a “naughty word”.

She explained: “Gyles Brandreth gave us a word earlier on, Andi, I don’t ever want you to use that, we’ve had a few tweets and apparently the word is very naughty. So don’t use it ok?”

Taking to Twitter to share their disgust over the phrase, one viewer wrote: “Well I so wish my curiosity hadn’t got the better of me from looking up gongoozle on the internet #lorraine @GMB.”

A second warned: “@reallorraine don’t use that word gongoozle! Look it up in the urban dictionary!”

A third added: “Seems gongoozle has an official meaning and an ‘urban dictionary’ meaning. I’d never heard of the word or either of the meanings… who says you learn nothing watching.”

@reallorraine don’t use that word gongoozle! Look it up in the urban dictionary!

However, Gyles is sticking by the word and told Twitter it was a gorgeous and perefctly respectable word – which Andy thank him for!

A different side to Lorraine

Last week, we saw a whole new side to Lorraine as she gave tips on how to beat the government’s new lockdown sex ban on The Last Leg.

Lorraine joked that people could say their partner was their cleaner and sneak them in the house – and later help with the cleaning up.

Speaking on the show, Lorraine said: “Who’s going to police it anyway? What you could do is pretend your boyfriend or girlfriend is your cleaner.

“You can have them round and do whatever you want to do and then have them do some ironing or clean the loo.”