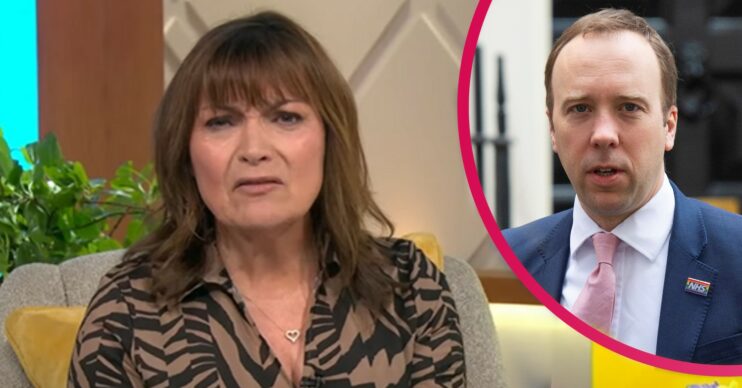 Lorraine Kelly left ITV viewers in hysterics today as she made a savage dig at Matt Hancock.

The ITV presenter, 62, was discussing Mr Hancock‘s recent podcast interview, in which he opened up about his affair with Gina Coladangelo.

On Tuesday’s edition of Lorraine, the host couldn’t help but mock the former Health Secretary as she branded him a “pound shop milk tray man”.

What did Lorraine Kelly say about Matt Hancock?

Read more: Matt Hancock breaks silence on affair in tell-all interview as he insists they ‘fell in love’

She was quick to poke fun at what he was wearing.

The politician was wearing a navy turtleneck and jeans.

“He looks like a pound shop Milk Tray man”

Lorraine said: “I don’t know what he’s come as. He looks like a Bond villain or a pound shop Milk Tray man.”

She added: “You remember he was caught on CCTV groping his advisor.

“His new partner Gina was spotted at the recording of that podcast.

Lorraine then moved on with her show.

But viewers were left in fits of laughter over Lorraine’s remark about Mr Hancock and shared their thoughts on Twitter.

One person said: “I am LIVING for #lorraine’s savage take down of Matt Hancock. ‘Pound shop milk tray man.'”

Another laughed: “Thanks @lorraine @reallorraine for the laughter this morning pure gold.”

During his podcast interview, Mr Hancock insisted that he and Gina ‘fell in love’ and said their affair wasn’t just ‘casual sex’.

He said: “I resigned because I broke the social distancing guidelines by then. They weren’t actually rules.

“They weren’t the law. But that’s not the point.”

He added: “The point is they were the guidelines that I’d been proposing.

“And that happened because I fell in love with somebody.”

What do you think of Lorraine’s comments today? Leave us a comment on our Facebook page @EntertainmentDailyFix.