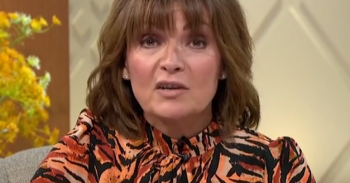 She didn't initially realise his slip of the tongue

Lorraine Kelly was forced to apologise after a guest swore live on air during today’s edition of her show.

The presenter, 59, was interviewing Irish actor Colin Farrell when he accidentally let slip a naughty word.

Colin, 42, uttered the words “horses’ [bleep]” as he spoke about about his new movie, Dumbo.

If you missed it, the actor blurted out the s-word which rhymes with “hit”.

Read more: Lorraine fans in hysterics as guest ‘pretends’ to like dramatic haircut

Speaking about the new live action version of Disney classic Dumbo, Colin said: “They say don’t work with kids and animals, but the days are more limited when you do. It’s a story about family, forgiveness and sickness.

“I play a widower, my children have lost their mother… but it does it in such a gentle way that is accessible to a wide variety of audience.  My character has to clean up horse [bleep].”

Host Lorraine didn’t immediately notice his slip of the tongue, but it didn’t go unnoticed by viewers watching from home.

One person wrote on Twitter: “Did Colin Farrell just say the S word on #Lorraine?”

Following an ad break, Lorraine told viewers: “I just have to say a tiny apology.

“Lovely Colin was on earlier and he said a naughty word. A few of you were not amused.

“Sorry about that, but it’s a live show. What can you do?”

Earlier in the interview, Colin said he wanted to give his Auntie May a quick shout out as she was watching.

He said: “She is the most gentle and bravest woman in the world.

Colin Farrell momentarily forgot his cousin’s name on the show today 😂 We 💕 his reaction. pic.twitter.com/kcZAnK8Gdt

“She has been fighting health issues and having a really rough time so I just wanted to say ‘I love you.'”

He then went to give his cousin a shout out but forgot her name!

He added: “And my cousin, whose name I can’t remember. Oh my God.