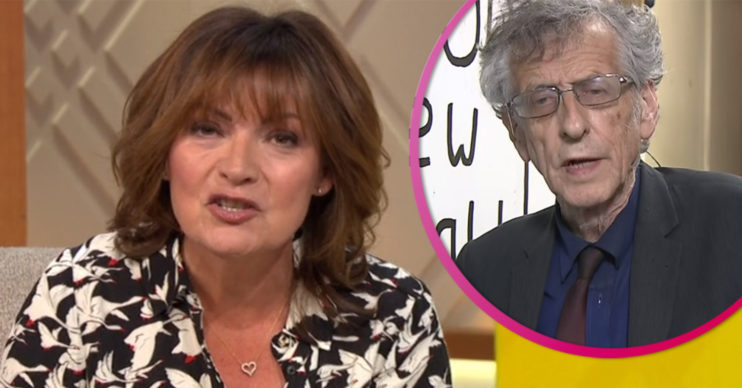 Lorraine admitted she was "shouting at her telly"

Lorraine Kelly branded Piers Corbyn a “nutter” after his row with Piers Morgan and Dr Hilary Jones on GMB.

Mr Corbyn appeared on Tuesday’s Good Morning Britain and caused a stir after claiming COVID-19 may not exist.

Both Piers and Dr Hilary criticised Mr Corbyn, with the GP calling his views “dangerous”.

Piers asked the brother of Jeremy Corbyn: “Do you believe the coronavirus pandemic is real?”

Mr Corbyn replied: “We’re challenging the government to give actual evidence that there is a virus.”

Susanna Reid cut in: “The Prime Minister himself was hospitalised with the virus. How much more evidence do you need?”

Mr Corbyn questioned: “Well, was he hospitalised with the virus or was he ill with something else?”

Mr Corbyn went on to insist there’s “no need for a vaccine” because they “make money for mega corporations and the pharmaceutical industries”.

Dr Hilary then weighed in, saying: “You are dangerous, you shouldn’t be preaching, you’re not medically qualified.

GMB later cut to Lorraine to find out what was coming up on her programme.

Lorraine said: “This has been such a good show this morning, I was shouting at my telly.”

Piers asked: “Would that have been during the Piers Corbyn interview by any chance?”

Lorraine replied: “What a nutter! It was like watching some kind of weird studio comedy…”

Meanwhile, Lorraine returned to her daytime show today after her summer break.

At the start of Lorraine, the star opened up about spending time with her family over the last few weeks.

The presenter told Dr Hilary: “I managed to get to Scotland which was really good to see my dad, which was great.

“Me and Rosie [her daughter] went to the zoo for the day.

“It was great. We saw penguins, we saw giraffes.”