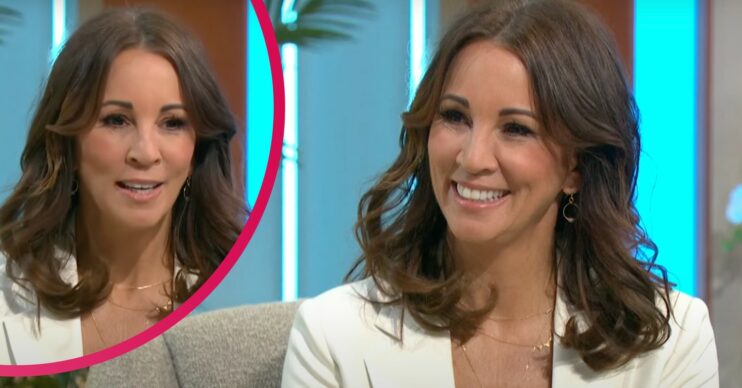 Lorraine viewers were left seriously distracted by Andrea McLean and her appearance on the show today (Monday, March 21).

It was the 52-year-old’s first appearance on ITV since December 2020, and viewers were blown away at how good she looked!

Why was Andrea McLean on Lorraine today?

Andrea quit her role on Loose Women back in December 2020.

However, today, the star returned to the small screen for a short chat with Lorraine Kelly.

Andrea was on the Scottish star’s show to promote her new book, You Just Need To Believe It. The book aims to help people turn their lives around in just 10 days.

Read more: Rob Rinder hits back at troll who criticises his appearance during emotional Lorraine interview

During her interview, Andrea spoke about how she didn’t regret quitting Loose Women, a move she says people have called “brave”.

“This is my first time being back on TV and back in the room that we share with Loose,” she said. “It was a [brave decision] and the reason the whole book came about was because at the time so many people said to me you’re so brave to do that thing, to pivot.

“And all I kept thinking was I don’t feel brave, I feel really scared but it was just something I really needed to do.”

What else did she have to say?

She then went on to explain how the book came about.

“And then I thought, right, how can I bottle everything I’ve used to do a brave thing when I’ve felt scared?” she said.

“I put together a 10-day challenge for my lovely community and then saw the results and it made me brave enough [to make the book],” she said.

Elsewhere in the interview with Lorraine, Andrea revealed that she had suffered a “breakdown” a few years ago.

“I was just trying to keep busy and not think,” she continued. “Learn from my mistakes and just stop for a minute.”

What did viewers say about Andrea McLean on Lorraine?

It wasn’t just what Andrea was saying on Lorraine that was grabbing viewers today – it was her appearance! Viewers were blown away by just how good the 52-year-old looked. Many took to Twitter to rave about the Scottish star.

“It’s good to see @andrea_mclean back on the telly. She’s glowing,” one viewer said.

After Andrea shared a photo of herself on the Lorraine set, one fan gushed: “Lovely photo Andrea and you look incredible.”

What did you think of Andrea’s appearance on Lorraine today? Leave us a comment on our Facebook page @EntertainmentDailyFix and let us know!