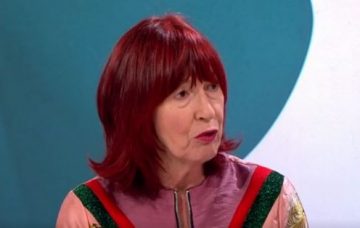 Stacey Solomon also spoke out during discussion on anxiety

The 71-year-old revealed on Wednesday’s episode of Loose Women she’d been sent messages from some viewers unhappy at her comments.

After Linda, 60, revealed her holiday snaps on Tuesday’s show, Janet had quipped: “You look lovely but not in that particular picture.”

She went on to praise Linda for other photos, but it was that remark that struck a chord with some viewers.

Janet spoke out about the reaction during a panel discussion on anxiety, saying the criticism she got over the comments had triggered an anxiety attack.

“Yesterday I went to see a really good film called I, Tonya. I came out in a really good mood and on the way home I looked at my phone. I’d made a few jokes with Linda about her swimsuit pic – which were jokes, to everybody watching – we are close friends.

“A couple of people on Twitter were on and on at me. I was reading them thinking, ‘Put that phone down!’ Then when I got home, I had a major anxiety attack about whether I’d been too horrible to Linda.

“We came out of the studio and we were really friendly. But that anxiety can even manifest in me.”

She did, however, speak to a psychiatrist once who told her “on the outside you’re like an iceberg. There is a lot beneath the waterline that people don’t know about it and you aren’t willing to reveal it.”

“But I am willing to talk about the fact even strong confident people like me, people can get through, they can absolutely get through.”

Many viewers took to Twitter to praise Janet for her openness.

She explained: “I get anxiety from time to time and I just had a wave of anxiety last night. It sort of doubles up inside of me. It’s something I know is a part of me and I stopped sort of trying to fight against it.”

Stacey added: “I think I’m quite good at managing how it manifests itself. It probably gets worse at nighttime when I have more time to sit and think about it. It’s a part of me and instead of battling against it, I have to say, hello, here you are, and ride it out as I know it will be over soon.

“I just have to accept this is a part of my personality rather than something I have to  try to get rid of, which I can’t.”

Janet advised Stacey to write down her thoughts before going to bed every night, prompting Stacey to say she’s always looked up to and been inspired by Janet, and she never would have thought someone as confident as Janet could experience anxiety.

Meanwhile, Janet revealed this week she was responsible for getting the whole Loose Women panel a pay rise.

The star said she wrote a letter to the Loose Women boss saying the women were worth more than they were getting – and it worked!

“Earlier this summer I felt we were underpaid, so I wrote a letter to our boss on behalf of all of us. I didn’t tell them I wrote it,” she said.

“I’m the oldest, I’ve got the least to lose, and I’m the most aggressive.”

All the Loose Women panellists, such as Stacey Solomon, Katie Price, Andrea McLean and Nadia Sawalha – are paid the same regardless of age, experience or celeb status.

Can you relate to Janet’s remarks? Leave us a comment on our Facebook page @EntertainmentDailyFix and let us know what you think.