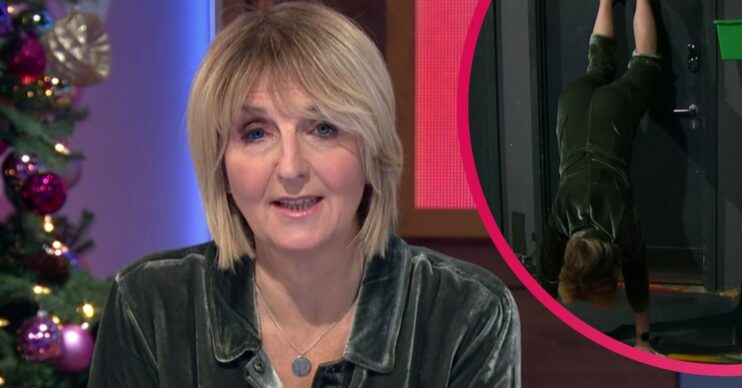 Judi's reaction is all of us!

Loose Women viewers were left in fits of laughter after a hilarious display from Kaye Adams on the show.

The 58-year-old panellist had fans in stitches as she attempted to twerk during today’s episode (December 16).

The subject of twerking came up on Loose Women today.

A clip of Judi Love dressed as a “sexy Santa” was shown on the show, and it’s safe to say the Loose Women, Judi included, were impressed.

Kaye told Judi: “Listen I’m gonna give you a run for your money.”

“You know how I love your twerking?” Kaye asked.

“And I’ve always said that I’d love to twerk. Ok, well I was speaking to this woman, and she said the way to learn to twerk is to do it upside down.”

Judi was confused, but Nadia Sawalha just burst out laughing.

Kaye went on to explain that twerking upside down is meant to “loosen up your hips, and so you learn to twerk.”

“I want to see this girl!” Judi declared, as Kaye rushed out from behind the desk and off-stage.

The 58-year-old Scot then went over to a door backstage.

“I hope this bloomin’ door is alright,” she said.

The Loose Women presenter then stood on her hands, put her feet up against the door, and started to twerk!

What did viewers say online?

It wasn’t just the Loose Women who were loving Kaye’s twerking on today’s show.

Viewers were blown away by Kaye’s twerking, and many found it absolutely hilarious.

“Made my day watching Kay twerk!! Awesome!” one viewer said on Twitter.

“When @kayeadams went behind the Xmas tree, [I thought] a stunt double would do the upside down twerk but nope, definitely her! You go girl,” another fan added.

“Loose Women today it made me lol. Judi Love is a tonic and Kaye Adams upside down twerk made me want to try it for myself,” a third viewer wrote.

“Nadia is jealous Kaye did a good twerk,” another viewer laughed.

What did you think of Kaye’s twerking? Head to our Facebook page @EntertainmentDailyFix and let us know!