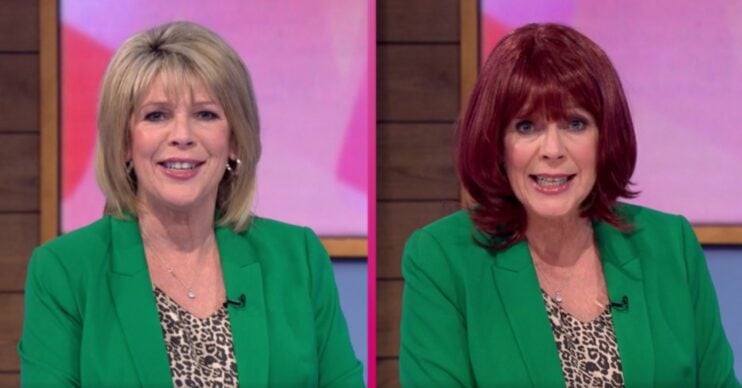 Ruth Langsford fans give her dramatic ‘hair transformation’ the thumbs up

Viewer reckoned it took 10 years off her!

The telly host made the change as part of a segment alongside Coleen Nolan, Janet Street Porter and Jane Moore.

And even though the new style isn’t permanent, many of those watching at home reckoned it really suited Ruth.

What did Ruth Langsford do with her hair?

She went red and wore a wig for a chat about what hair colour indicates about people’s characters. Apparently, a study has suggested that redheads enjoy more romantic relationships than anyone of any other hair colour.

Titled ‘Do gingers have more fun?’, Ruth admitted she was won over by turning to the auburn side.

How the Loose Women pundits reacted

Turning to the only red-locked member of the panel, Ruth joked she could take on some of Janet Street Porter’s characteristics.

Ruth said: “I’m channeling a bit of you today I think.”

That literally takes 10 years off you!

Janet replied by asking whether Ruth might consider staying red for the meantime – and see what her husband makes of it.

“Are you taking that wig home to Eamonn [Holmes]?” Janet pondered.

Ruth responded: “I think he quite likes a red-head, Eamonn. And he likes you, doesn’t he?”

But Ruth wasn’t the only Loose Woman who changed up her appearance for the item.

Coleen also had a crack at being a redhead.

And her bright red wig was arguably even more striking than Ruth’s.

Nonetheless, she seemed quite happy for Ruth to command more of the attention.

Many of those watching Loose Women at home were blown away by the difference. One person even suggested the look knocked years off Ruth.

“I’m a redhead from birth,” they wrote on Twitter.

“That literally takes 10 years off you!

“Still stunning blonde though I must add.”

But not everyone agreed. A different viewer huffily tweeted: “Someone fix Ruth’s hair #LooseWomen.”