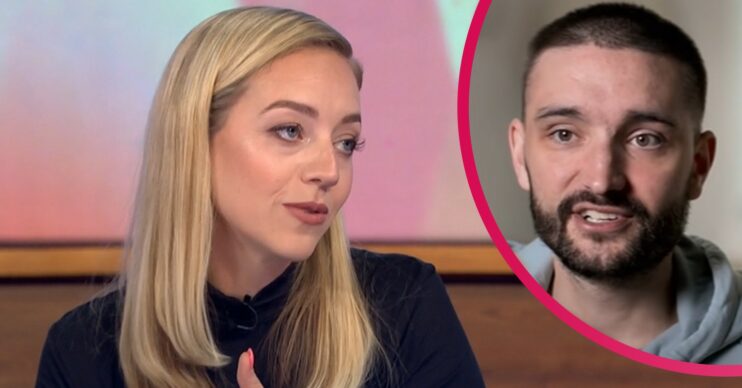 Kelsey opened up about her relationship with "soulmate" Tom

Loose Women viewers praised Tom Parker‘s ‘brave’ widow Kelsey today as she made an appearance on the show.

Kelsey opened up about losing her “soulmate” Tom following his tragic death in March.

Tom died at the age of 33 after battling brain cancer, leaving behind Kelsey and their two children.

On Loose Women today, Kelsey recalled Tom’s final days and admitted they were “magical” but “tough”.

Opening up about Tom’s final days in a hospice, Kelsey said: “With Tom, even the final moments were magical.

“But it was really, really tough. One of the days I just laid in bed and it just felt like someone had dropped weights on me. I was thinking how can I actually get out of bed this morning?”

She said: “He has given me so many signs… car alarms go off at 4 in the morning.

Kelsey also spoke about her and Tom’s love story, saying they were “soulmates”.

She added: “We loved each other so much, he was my best friend… I found the love of my life at the age of 19 and I’ve spent all these years with him.

“How lucky am I to say I found love? I was so in love with him.”

Viewers praised Kelsey for her appearance on the show on Twitter.

One person said: “Kelsey Parker on @loosewomen today so brave!!! What an amazing woman.”

Another wrote: “Kelsey Parker is a brave, strong and an incredible woman, thinking of her and the little ones everyday.”

A third added: “So much love for Kelsey Parker, she’s clearly a very brave woman who had a wonderful marriage with Tom.

“I’m so sorry for her loss but believe watching this that she and the kids will go forward strong.”