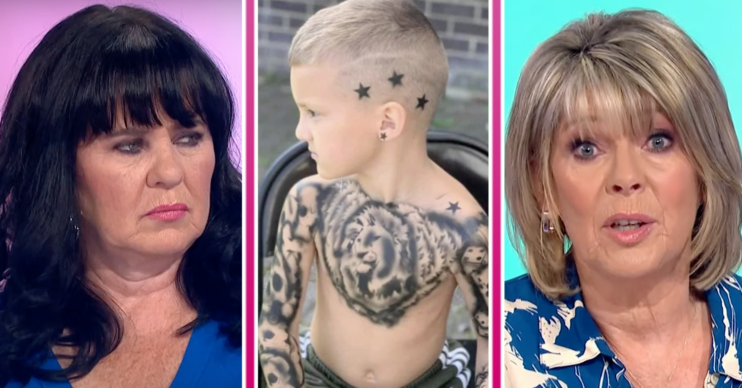 Would you let your child get a temporary sleeve?

Loose Women viewers were divided over a question about temporary tattoos for tots today (August 2), with a poll being split 50/50.

Ruth Langsford posed the question: “Now how do you feel about this, temporary tattoos for tots?”

And neither the Loose Women ladies – nor the viewers – held back.

Loose Women panellists agreed it was a ‘bit of fun’

Ruth turned the question to Sophie Morgan, who is a big fan of tattoos.

Sophie told Ruth: “I love it. It’s fun. I mean, I love tattoos, so I would kinda like this. They’re only temporary, and it is just for a bit of fun.

Read more: Gloria Hunniford blasted over use of language today

“I mean, looking at those little boys, I bet they look up to loads of footballers and see them covered in tattoos.”

She then continued by expressing: “Tattoos have always carried a stigma which I think is slowly changing.

“Rhat’s why I suppose maybe you might look at it and go ‘oh god, I really don’t like the look of that’.”

However, she added: “But for me, it’s a form of decoration.”

Gloria Hunniford chimed in, saying: “All my parental life, I wanted to stop them getting tattoos and piercings… because they’re so difficult to remove… but now I want a tattoo.”

Coleen Nolan added: “I think the problem with these ones is they are almost full body tattoos, and when we were kids, they were the little stick-on transfers

Ruth revealed that the poll conducted by the Loose Women Twitter page received a distinct 50/50 split from the fans.

She exclaimed that this was a “first for Loose Women”.

Fans got in touch with the show to express their thoughts on the question.

One viewer agreed with the panellists and stated: “Kids see their parents with tattoos, and you can buy stick-on ones for kids. What’s the difference?”.

Another said: “Temporary tattoos have always been around for kids, same as face painting, hair braiding, so what? It’s harmless as long as it gets washed off afterwards.”

However, one person said: “What happened to ‘let kids be kids’?”.

One person replied to the Twitter poll saying: “It was always a thing since I was a child, just like non-permanent hair colouring.

“Not sure why it is a debate now. Children should be allowed to have a bit of fun during summer holidays.”