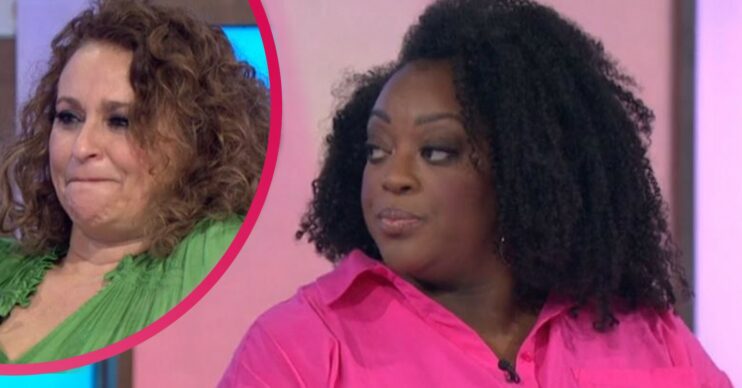 People were eating their lunch!

Loose Women viewers were left feeling ‘sick’ today over a shower segment on the show.

On Friday, Kaye Adams, Frankie Bridge, Judi Love and Nadia Sawalha discussed what parts of their body they clean first in the shower.

However, viewers were stunned when Judi got a little too graphic.

Revealing her shower routine, Judi explained: “I might let the water hit my face first and then make it trickle down.

“And then I feel myself and then I might have a quick wash down there,” gesturing towards her private area.

She continued: “And then I will start all over again and end with that bit.

“Then I might turn around and spread and then yeah…”

Her co-stars were in hysterics as Kaye asked: “Spread?!”

Frankie added: “You do a lot of washing down there, you know that’s bad for you?”

Judi replied: “You make sure you use stuff that you’re not allergic to and all the rest of it.”

Nadia then explained her showering routine, saying: “I face in, I get my face done, armpits. Suppose I do do my boobs.

“And then I don’t do too much down there because I think it’s alright by itself.”

Judi looked shocked as she said: “You better zoom in on my face right now.”

Nadia added: “I don’t believe in soap down there.”

Viewers watching were divided over the segment, with some admitting they felt sick.

One said: “#LooseWomen I’m going to sick up my pea and ham soup.”

Another added: “Watching Judi Love simulating showering has left some sick in my mouth.”

One tweeted: “Jesus @1Judilove calm it down luv. This ain’t the comedy club after hours.”

However, one person said: “@1Judilove is literally my sprit animal, you literally give me life.”

Another added: “@loosewomen Zooming in on @1Judilove face. I hear ya,” followed by laughing face emojis.