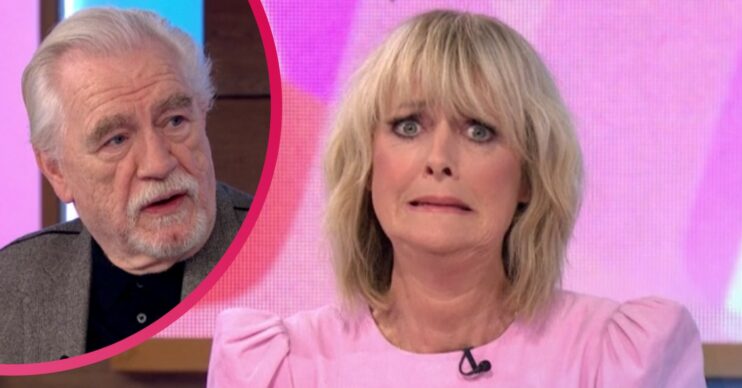 The 75-year-old actor appeared on the ITV programme to promote his tell-all memoir.

Sitting down with Jane, Katie Piper, Janet Street-Porter and Linda Robson on the panel, Brian also spoke about his HBO drama Succession.

During the chat, Jane quizzed Brian over his businessman character Logan Roy.

The journalist asked: “Logan Roy, is he the closest character to you in terms of personality?”

Brian responded: “I wouldn’t say that. I have an empathy for Logan Roy. I think he’s a little misunderstood. He’s a self-made man.

“He probably started off on one side of the political spectrum and ended up on the other side of it through experience and disappointment.

“The one thing we share in common is a disappointment with the human experiment. We do believe that. Look at the current crisis we’re living in.”

He added: “I can’t believe we’re still in the same, excuse me, s*** that we’ve been in time and time again. We’re repeating.”

Jane quickly turned to the camera to apologise for Brian’s language.

She said: “This is daytime television – apologies. Mr Cox is going to go wash his mouth out after the break.”

Brian Cox is a legend

The moment certainly didn’t go unnoticed with some Loose Women viewers at home.

Taking to Twitter, one commented: “Brian Cox is a legend and I just wish he signed off his segment Logan Roy style… ‘[bleep] off!’. But I’ll settle for s**t.”

A second added: “Brilliant actor, honest too. And yes I wish he’d had said [bleep] lol.”

What a legend Brian Cox is – I could have listened to him for the entire show. I must read his book. #LooseWomen

How marvellous is Brian Cox 😀 @loosewomen

Meanwhile, others praised Brian’s appearance on the show.

One fan tweeted: “How marvellous is Brian Cox.”

Another praised the actor, saying: “What a legend Brian Cox is – I could have listened to him for the entire show. I must read his book #LooseWomen.”

A third wrote: “The more I see Brian Cox the more I like him, no [bleep], no lies (I hope) and just honest chat.”