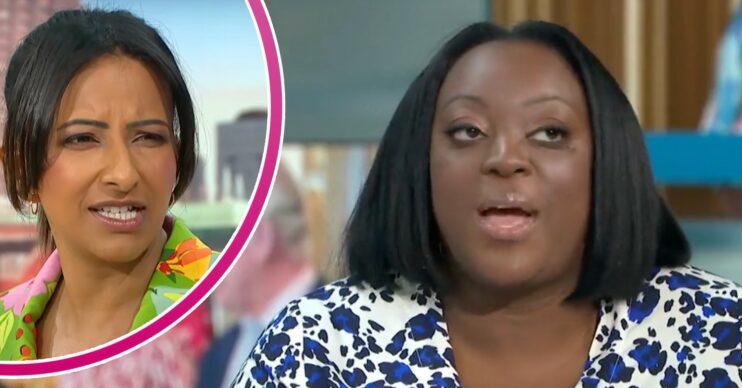 However, the conversation soon turned to discussing the heatwave.

And, when Judi revealed her way of dealing with body odour during the heat, it’s fair to say viewers were repulsed.

Judi was being interviewed by Ranvir Singh and Ed Balls about her new show, Work in Progress.

However, the conversation soon turned to the big topic of the week – the heatwave in the UK.

And during this conversation, Judi revealed the strange way she deals with her body odour during the heat.

To demonstrate how she keeps herself smelling good during the heatwave, Judi bought along a bowl of sweet potatoes and some deodorant.

Noticing Judi’s props, Ranvir said: “Now most people have a croissant for breakfast, but you appear to have brought a bowl full of sweet potato and some deodorant?”

“For those who are going out into the sun, please wear your deodorant because it’s hard for us, especially when we’re in close proximity with each other,” Judi said.

“And this sweet potato, you can boil it, make it cool and put it under your armpit if you’ve got an odour issue,” she continued.

“What?!” a shocked Ranvir said. “And have those been under your armpits yet or…?” Ed asked.

“No! You have to boil it, mash it, let it cool a little bit, just put it under your armpit and let it draw out the stench!” Judi explained.

She then went on to explain that it’s an “old school method”.

“Can I just say, it’s an education Judi. Everything you say is an education, it’s a joy to have you in,” Ranvir said.

Judi’s method may have worked for her, but some viewers were shocked by it.

“What ????? Don’t forget to put sweet spuds under your armpits…” another wrote.

“As usual Judi Love talking a load of [bleep], She could be responsible for people with odour issues ending up in A&E with burns in their armpits, caused by hot sweet potato!” a third ranted.

“What the [bleep] is this on @GMB sweet potatoes under your arms. Is this news?” another wrote.

Others were just happy to see her on the show. “Big up @1Judilove on @GMB! Great role model! Feeling hot hot hot,” one viewer wrote.