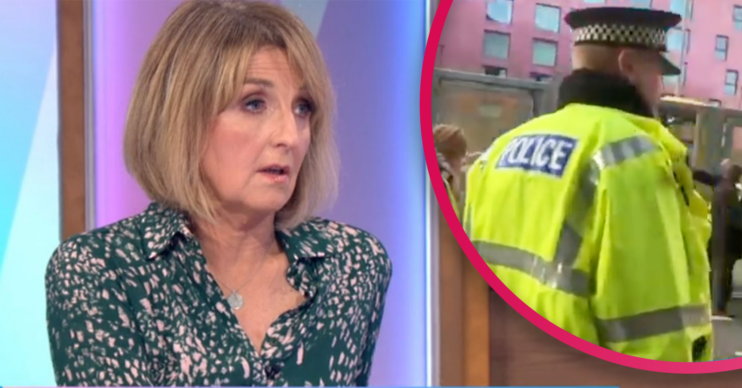 So was she acting 'surreptitiously'?

Loose Women presenter Kaye Adams has revealed how police at the COP26 summit stopped her for “acting surreptitiously”.

Kaye was in Glasgow, where world leaders are meeting to talk about climate change, when she was stopped by a plain clothes officer.

She was filming some clips for Instagram on her iPhone when she was stopped by the officer.

What did Loose Women star Kaye Adams say about being stopped by police?

Taking to Instagram, the Loose Women star shared the experience with her followers, writing: “Amazing to think that the future of the planet is being discussed behind these turnstiles.

“Just slightly concerned to be stopped and questioned by a plain clothes police officer who thought I was dodgy.”

Read more: Coleen Nolan admits ‘nothing is out of bounds’ as she reveals new boyfriend has ‘kinky’ streak

She shared the tale with her Twitter followers as well, tweeting: “Just got stopped and questioned by a plain clothes police officer near #COP26 for acting ‘surreptitiously’. Never been accused of that before.”

Just got stopped and questioned by a plain clothes police officer near #COP26 for acting ‘surreptitiously’. Never been accused of that before!

As a result of the post, many followers replied to her comment, with many poking fun at her predicament.

“You were not doing it very well if the officer noticed you,” quipped one fan.

Another asked: “What were you wearing Kaye?” to which she replied: “A spiderman outfit. What’s your point caller?”

“Were you being suspiciously surreptitious?” asked someone else.

World leaders have descended on Glasgow for COP26, which stands for Conference of the Parties.

It’s the UN’s conference on climate change and everyone from Joe Biden to our very own Boris Johnson is in attendance.

So it’s good to know that security is being taken very seriously.

What else happened at COP26?

Yesterday Prince Charles gave a speech, after taking a little tumble on his way to the stage.

But social media users accused him of being a hypocrite after his sombre address.

Charles, who has raised awareness for climate change in the past, urged leaders to team up to tackle current problems.

However, one viewer posted a graphic to prove Prince Charles flew 16,000 miles back in January last year.

At the time, reports claimed that the royal totalled over 16,000 miles in just 11 days.

So what do you think of Kaye’s revelation? Head to our Facebook page @EntertainmentDailyFix and tell us what you think of our story.