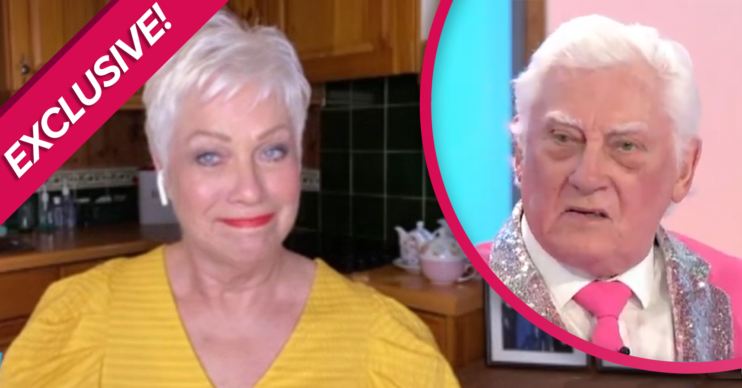 Denise Welch has revealed her worries for her 84-year-old dad Vin after travelling home to Country Durham to visit him.

And, speaking to Entertainment Daily today, Denise revealed that her beloved dad was now safe and sound at home with her.

What did Denise Welch say about her dad?

Speaking to launch her new true crime series Survivors for Crime + Investigation, Denise revealed: “I brought him back down with me.”

She then apologised in advance just in case she had to rush off our Zoom chat to help her dad.

“For a joke for Loose Women recently they gave us one of those buzzers you use on Catchphrase, so I gave it to my dad,” she said.

“So if you hear a buzzer going off, it’s my dad wanting something.”

Vin has gone ‘downhill since Christmas’

Asked how Vin is doing, Denise revealed: “It’s really a shame, anybody who knows my dad knows he’s a party animal – he out-parties me at every stage, although that’s not hard now because obviously I’m sober.

“Then at Christmas he had a big meal and he had indigestion and instead of it going away it’s triggered some gallstone issues he had and he’s just gone downhill since then.”

She added: “I think they’re going to remove his gallbladder but we’re just trying to keep his strength up until then but it’s hard because he’s got no appetite.

“The weird thing is he hasn’t got the pain. It’s some weird thing going on, but the fact is he can’t eat anything.

“But I feel better having him here.”

Fall was a ‘shock to the system’

On yesterday’s Loose Women, Denise revealed why she had headed back home, and just how it made her feel.

She said: “I’m actually in my childhood home.

“My dad Vin, friend of the show, has not been well bless him since Christmas.

“He’s got to have a gallbladder operation and he had a bit of a fall the other night.

“I drove up hastily to see him. And he wants everybody to know that he’s alright but it was a bit of a shock to the system.”

Catch Denise’s new show Survivors when it premieres on April 19 on Crime + Investigation at 9pm.

You can send your get well wishes to Vin on our Facebook page @EntertainmentDailyFix.