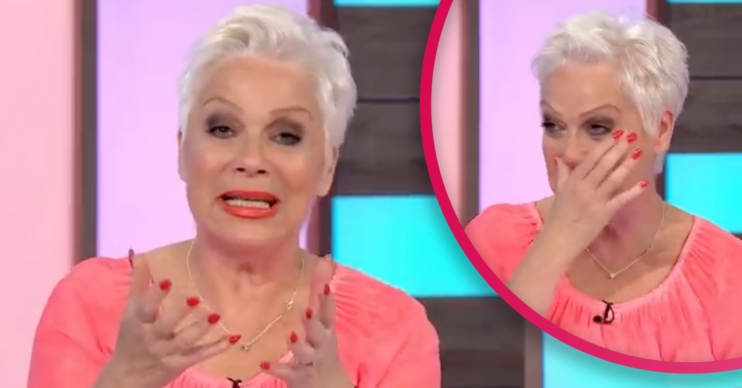 Loose Women star Denise Welch broke down in tears earlier today (May 20) as she revealed her beloved dad Vin has been admitted to hospital.

She said: “At Christmas he had a big meal and he had indigestion and instead of it going away it’s triggered some gallstone issues he had and he’s just gone downhill since then.”

On today’s Loose Women, Denise revealed that Vin is now in hospital.

So what did Denise say about her dad on Loose Women today?

The ladies were talking about the difficulties elderly people have coping with Government restrictions and a rise in the use of technology.

It came after an elderly man was “ignored for 15 minutes” after heading to the pub for a pint because he didn’t have an app to order it on.

My dad actually is in hospital in Newcastle and I just want to say, I love you Dad.

And it’s something Denise said she’s seen with her beloved dad.

She said: “My dad has really struggled in lockdown and has been really really poorly.

“As his health has declined over the past year he has really struggled with not having people over to the house to do certain things and as regards banking.”

Then she broke down as she told the ladies her dad was currently in hospital.

She said: “My dad actually is in hospital in Newcastle and I just want to say, I love you Dad.

Read more: Loose Women stars branded ‘inspirational’ as they strip down to swimwear

Speaking about the rise of mobile phone apps in everyday life, Denise added: “All these things have added to the fact. I just can’t keep up with it.

Speaking about her dad to ED! earlier this year, Denise said his poor health has come as a real shame to anyone who knows him.

She said: “It’s really a shame, anybody who knows my dad knows he’s a party animal – he out-parties me at every stage, although that’s not hard now because obviously I’m sober.

“I think they’re going to remove his gallbladder but we’re just trying to keep his strength up until then. But it’s hard because he’s got no appetite,” she added.

Denise didn’t reveal what Vin has been hospitalised soon, but we hope he’s on the mend very soon.

Send your best wishes on our Facebook page @EntertainmentDailyFix.