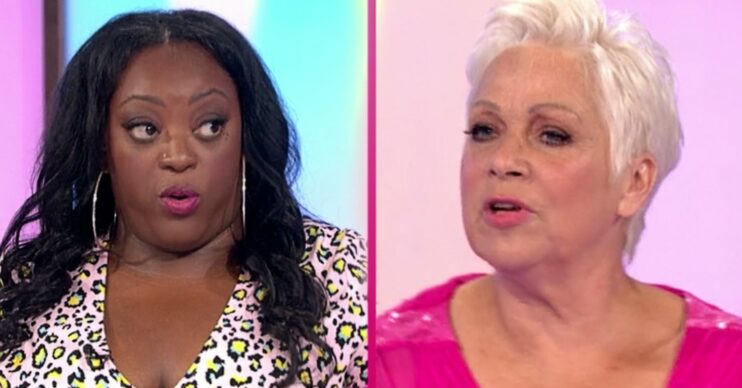 What happened with Denise Welch on Loose Women today?

They focused on how when Gareth Southgate was appointed England boss, many thought he wasn’t up to the task.

That’s when the four women discussed how they bounced back from major setbacks in their own lives.

When it came to Judi, she reflected on the death of her father only months ago.

She said she was feeling empty, and that a part of her had died as well. She also reconsidered her career as a comedian.

As Judi was talking about her journey of grief and rebuilding, Denise interrupted her to talk about her own struggles with mental health.

Why are you interrupting Denise?!😔 #LooseWomen

How did viewers react to Denise?

Viewers took to Twitter to express their anger at Denise interrupting Judi during such a personal story.

Another asked: “Why are you interrupting Denise?! #LooseWomen”.

A third said: “It’s so annoying, she keeps on until the other person gives way.

“Not everyone wants to just listen to her point of view, there are three other people on the panel.

Denise is known for airing her opinion, and last month she clashed with host Kaye Adams about the Matt Hancock controversy.

The outspoken panelist was responding to the former Health Secretary’s rule-breaking and affair with aide Gina Coladangelo.

Denise said she would now “no longer abide by rules that make absolutely no sense”.

However, some viewers agreed with Denise.

One said: “We need Denise on the show more!! Hearing the truth for once feels good.”

Another tweeted: “Yes Denise. Saying what most of us are thinking!”