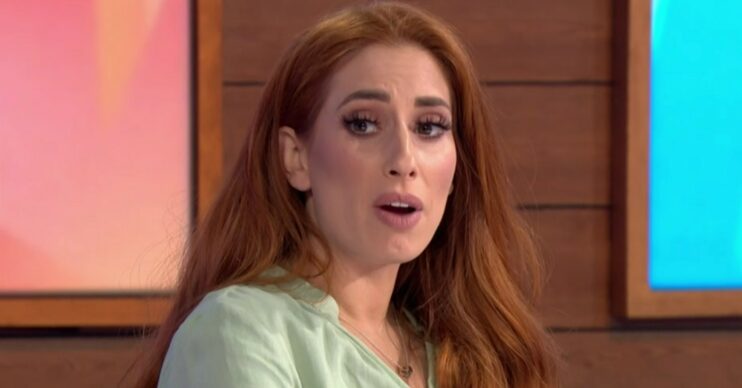 'What happened to Stacey's maternity leave?'

Stacey Solomon baffled Loose Women viewers today (August 17), as she returned to the ITV panel during her maternity leave.

The mum-of-three recently celebrated her baby shower on the programme ahead of welcoming her second child with Joe Swash.

However, Stacey surprised fans as she graced the panel show on Tuesday afternoon.

Read more: Stacey Solomon admits she gets ‘so anxious’ during pregnancy after miscarriages

Kate opened the programme by introducing her fellow co-stars.

But some viewers were left slightly confused.

How did Loose Women viewers respond?

On Twitter, one said: “Huh? I thought Stacey was in maternity leave? #LooseWomen #ThisMorning.”

Another added: “What happened to Stacey’s maternity leave?”

A third commented: “I thought Stacy recently had a big send off to go on maternity leave #LooseWomen.”

Another shared: “Why is Stacey there? Thought she had went off on maternity leave?”

A fifth tweeted: “#LooseWomen I thought Stacey was on maternity leave. Confused.”

I thought Stacey was on maternity leave

Meanwhile, one viewer was quick to clear up the confusion.

They claimed in a tweet: “The next few weeks are all pre-recorded, giving the cast and crew a summer break.”

Huh? I thought Stacey was in maternity leave? #LooseWomen #ThisMorning

#LooseWomen I thought Stacey was on maternity leave. Confused.

Earlier this month, Stacey took part in her final show before heading off on maternity leave.

She celebrated her last day alongside Kaye Adams, Nadia Sawalha and Linda Robson.

Stacey, 31, missed her previous baby shower on the programme, after giving birth to her youngest son Rex.

The star appeared on the show in a tiara and sash at the time, before being presented with her leaving presents.

Meanwhile, days after the shower, Stacey opened up on her pregnancy nerves.

The ITV favourite is welcoming a daughter with partner Joe, but suffered a number of miscarriages before falling pregnant.