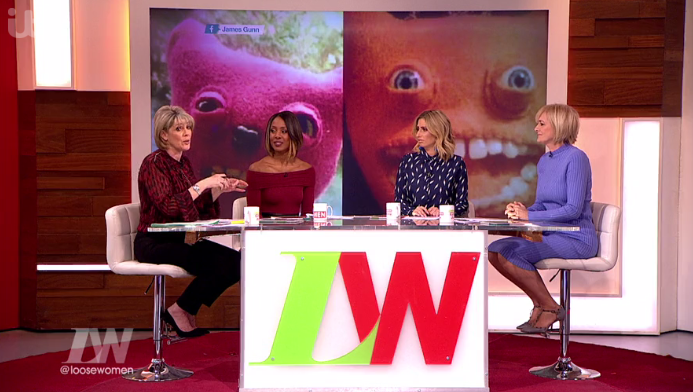 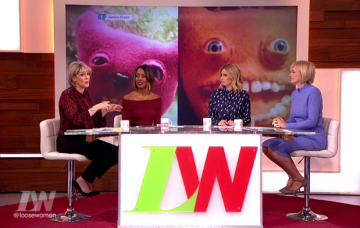 Show berated for not doing its research

Loose Women fans were left with their palms placed firmly on their foreheads after a segment in which the ladies discussed an “odd new parenting trend”.

Looking like she was about to throw up, Ruth Langsford explained that some mums and dads have taken to sewing their tots’ displaced gnashers into the mouths of soft toys.

To prove the point, we were then shown an example of the sinister-looking creatures.

However, fans of the show slammed the comments, pointing out that the toys in question definitely DO NOT use real teeth, and are in fact manufactured by an established female toy-maker, who calls them Fugglers.

Ruth, who has a 15-year-old son with her husband Eamonn Holmes, looked distinctly unimpressed as she introduced the photo of the two unusual-looking teddies.

She grimaced: “This is an odd new parenting trend, because those teeth are REAL.

“This is a craze where people sew their children’s baby teeth into a soft toy.”

At that point, a baffled Stacey Solomon piped up: “How do you sew a tooth?”

Someone on the panel then added: “But they don’t look like baby teeth…”

One mocked: “Just seen the clip for #LooseWomen – please tell me they don’t believe the Fugglers are really the new parents’ baby-teeth trend.”

Another slammed: “Hey @loosewomen – your article on @fugglers was massively lazy. You did zero research and didn’t credit the lady who makes them. This is a handmade business. No parents are sewing real teeth into toys.”

And a third concurred: “I don’t think you’ll find the baby-teeth story is true at all.”

Just to drive home the point, the show even received a tweet from the maker herself – a Mrs McGettrick.

She wrote: “Hi @loosewomen – I think someone on the internet has been telling you porkies… These are made by me, and they’re not real teeth.”

To be fair to Ruth Langsford, she did explain on the show that the toys had originally been made out of fake teeth, before some parents became inspired by the idea and started using real ones.

So maybe, just maybe, that cuddly toy you bought from the charity shop contains real baby teeth after all…