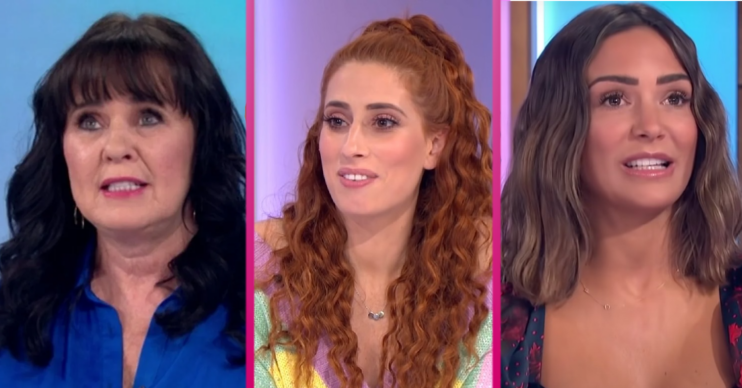 Some of the stars are worth a staggering amount!

The Loose Women presenters’ earnings have been revealed – and some of the stars are worth some eye-watering figures!

Not only that, but it’s also been claimed that one of the panelists is on a whopping £3,000 per episode!

It certainly pays to be on the hit ITV show.

Here’s how much some of the Loose Women stars are worth.

How much is Loose Women star Stacey Solomon worth?

It’s been claimed that Stacey is the star who’s earning an enormous £3,000 per episode on Loose Women.

She is believed to be worth around £3.5m. Her home, Pickle Cottage, is reportedly valued at £1.2m.

According to The Sun, companies are “desperate to work with her” as she has “carved out a real niche” for herself.

Of all the Loose Women panelists, it’s Penny who’s said to be worth the most.

The former model, who’s married to rock star Sir Rod Stewart, is believed to be worth around £15.2m.

The 51-year-old star is believed to have two mansions in her name. The first property is in Essex and is believed to be valued at £4.65m. The other is in West Palm Beach in Florida.

Ex-The Saturday’s star Frankie Bridge is reportedly the second wealthiest of all the panelists.

The singer and star of I’m A Celebrity is said to be worth around £9m.

She is reportedly the highest earner from The Saturdays due to her tv work, including a stint on Strictly. She is also the author of a best-selling book.

The 33-year-old singer, who’s married to ex-footballer Wayne Bridge, shares a mansion in Surrey with her family and in-laws.

She returned in 2013 and has been a regular fixture on the panel ever since. Away from Loose Women, she was a panelist on The Wright Stuff and did a stint on Good Morning Britain too.

She also presents the morning show on BBC Radio Scotland on weekdays.

What is Coleen Nolan worth?

Coleen has been on Loose Women, on and off, since 2000. She’s also had stints hosting on This Morning, and taken part in Dancing On Ice, Strictly, Celebrity Big Brother.

What is Ruth Langsford’s net worth?

Ruth is reportedly worth around £4m.

The star has been a part of Loose Women, on and off, since 1999, and is believed to have earned over £2m last year through her company, Hey Ho Ltd.

She has also hosted This Morning and took part in Strictly Come Dancing in 2017.

She owns a six-bedroom mansion with Eamonn Holmes in Surrey and owns a clothing brand.

What is Loose Women’s Brenda Edwards worth?

Brenda is another star who has made her name away from Loose Women.

The star only joined the show in 2019. Prior to being a panelist, she appeared on the X- Factor in 2005, and since 2021 has been a presenter on Songs of Praise.

She has also performed on stage, appearing in shows like Chicago, We Will Rock You, and Hairspray.

She’s reportedly worth around £3.8m.

How much is Janet Street-Porter worth?

Janet has been working as a journalist since the late 1960s. She began her radio career in 1973 and was a presenter on Saturday Night People between 1978 and 1989.

She has featured on shows like I’m A Celebrity, Countdown and Celebrity MasterChef.

Since 2011 she has been a panelist on Loose Women.

Janet is reportedly worth around £3.5m. In 1988, Janet had a castle-type property built for her by a friend.