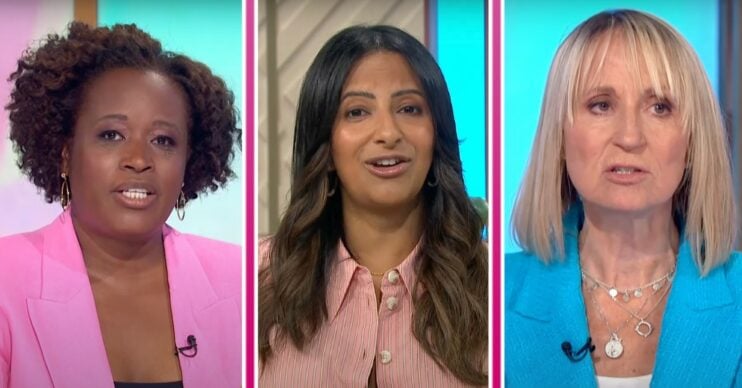 Furious viewers issue plea to ITV over Lorraine, This Morning and Loose Women

Some viewers have had enough

Loose Women’s menopause coverage, as well as This Morning‘s and Lorraine‘s, has left some ITV viewers issuing the broadcaster with a desperate plea.

Some viewers of the hit ITV shows are getting fed up with the constant discussions of the menopause – with many taking to Twitter to air their grievances.

There was a common theme running through most of ITV’s morning and early afternoon shows today.

The menopause was discussed on all four shows at various points throughout the morning.

During today’s edition of Lorraine, hosted by Ranvir Singh, she welcomed Dr Anisha Patel onto the show.

During her appearance, Dr Anisha answered viewers’ questions about the menopause and gave advice.

Later on, there was even more talk about the menopause on This Morning.

This Morning, of course, has its own Menopause Bus, which is currently touring the country.

The aim of the bus is to raise awareness, and it is regularly advertised by This Morning.

Today’s edition of Loose Women also featured a chat about the menopause – namely when Lisa Snowdon joined the panelists to talk about her menopause journey.

The 50-year-old spoke about how she had struggled with the menopause eight years ago.

She explained how she was “horrible” with her partner due to her struggling with the menopause.

Today, some viewers finally had enough of all of ITV’s menopause coverage – and took to Twitter to complain.

“Might as well change morning TV to Menopause TV,” one viewer grumbled.

“Bit of an overkill on this topic now. Would like more balance and hear from women who are living okay with it.

“And let’s be informed and educated by specialists rather than celebs,” another viewer pleaded.

“Anyone else sick of having celebrities shove their menopause stories down our throats?!” a third ranted.

“Was the menopause just discovered recently?????? Because #Lorraine #thismorning and #loosewomen don’t [bleeping] shut up about it! Sort it out @itv,” another tweeted.

‘It matters to women’

However, some viewers weren’t happy at those complaining. “Said the man. It’s being talked about now because it’s been kept hidden away for so many years. It matters to women.”

“So much negativity. Menopause affects people differently, a high percentage of women that have been put on antidepressants when HRT could have helped them, women taking their own lives. Some being made to feel shameful.

“This is why it is being talked about – to help,” another wrote.