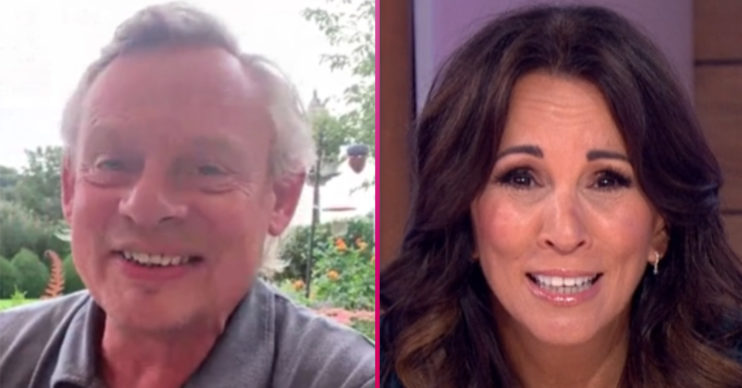 The Doc Martin star appeared on the ITV show today

Loose Women guest Martin Clunes has called out the show for featuring a segment on ‘dad-bods’.

The 58-year-old actor appeared on the panel show today (September 8) to discuss the ending of his hit TV series Doc Martin.

But when the topic of ‘dad-bods’ came up, Martin appeared keen to voice his opinion.

What did Martin Clunes say on Loose Women?

Ahead of Martin’s chat, host Andrea McLean revealed she and her co-stars would be discussing the ‘perfect dad-bod’.

The subject matter clearly hit a nerve with the TV favourite, who later went on to bring it up during his interview.

Following a question on whether he would reprise his role as Gary Strang in Men Behaving Badly, Martin said: “This is what you’re about to do this dad bods thing. That’s not good.

“You couldn’t talk about a woman’s body in that way.

“You’d be up in a tribunal and rightly so.

“I just don’t see why it’s quite so open season on men because you would not be saying those things about women.”

Denise Welch replied: “We were celebrating it. You should have heard what Andrea was saying about you!”

As the panel erupted into laughter, Andrea joked: “It was all good! I think you’re lovely.”

Why is series 10 the last for Doc Martin?

Martin later went on to reveal why Doc Martin is ending.

The popular show is set to finish in 2021 after 17 years on-screen.

He told the panel: “All good things have to come to an end. We’re at huge pains not to repeat ourselves and we’ve sort of done everything.

“It would be great to carry on but I don’t think we could keep it as good. We’ve had 16 years.”

Meanwhile, earlier this week, Martin said in a joint statement with writer Philippa Braithwaite: “We have loved making nine series of Doc Martin.

“When we launched the series in 2004 we could never have imagined how much our loyal viewers would take to the grumpy Doc like they have.

“The series has avid fans both in the UK and throughout the world and we are thrilled that Doc Martin has topped the ratings every time. ‘However, after sixteen years we now feel that the time has come to say goodbye to Portwenn.

“We will be making the tenth and final series in 2021 and we are very much looking forward to returning to Cornwall to film it.”

Martin has starred in the show as Dr Martin Ellingham since 2004.