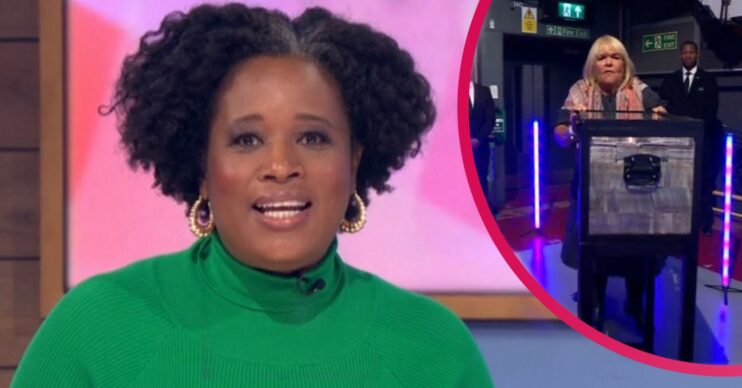 The star, 63, appeared on Thursday’s show to host the ITV competition segment and seemingly forgot she was live on telly.

Linda was introducing the competition prize and wheeled out a box containing £1million, before she dropped the F-bomb!

She said: “Hello ladies, they’ve left me in charge with the prize can you believe it? This is it, it’s one million pounds right here in this trolley.

Read more: Loose Women: Linda Robson urged to see a doctor as she admits to wetting herself

As she maneuvered past the cameras, Linda turned back and said: “How the [bleep] do I look at it?”

Her co-stars Charlene White, Sunetra Sarker, Brenda Edwards and Kéllé Bryan all gasped in shock as Linda put her hand over her mouth.

Charlene then said: “Apologies. I’d like to apologise for Linda’s language. She knows that she’s done wrong. I think Linda has forgotten that we are live on air.

Linda then continued with her competition segment.

At the end, Charlene once again apologised to viewers.

Meanwhile, others predicted some people will complain to TV watchdog Ofcom about Linda’s potty mouth.

One tweeted: “Ofcom’s gonna be busy with complaints not because of what Linda said.”

Another wrote: “The offended complaining to Ofcom as we speak.”

One joked: “Ofcom’s gonna be busy today,” followed by a laughing face emoji.

However, some people didn’t see the funny side to Linda’s slip-up.

One said: “How many times can @itv keep letting Linda Robson swear on lunchtime telly? This is not the first time.”

Another commented: “The language out of Linda is disgusting on day time TV when my grandson was watching.”