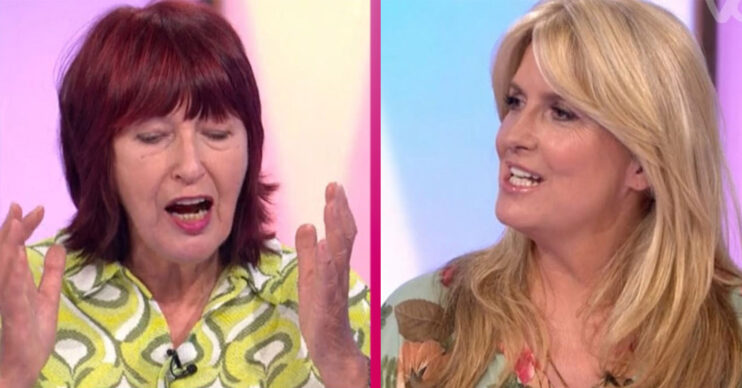 The pair spoke over each other during the disagreement

On Wednesday’s show, the panel discussed whether working mothers should highlight being a parent on their CVs.

Penny agreed with the view and said it should apply to fathers too.

What did Penny Lancaster say on Loose Women?

She said: “Mothering is a hard job and there’s no training for it but you work at it as you go along.

Janet then shared her view, saying she doesn’t disagree that being a mother “requires a lot of skills” but “being a boss requires the same set of skills”.

What did Janet Street Porter say?

She continued: “The issue for me is when you’re interviewing someone for a job, you want to know how they’re going to react in a crisis, what qualifications and you look carefully at what they studied at university.

“Whether they have a degree that you might think is pretty worthless.

“I’m sorry I can’t put ‘mother’ on a CV up there with a degree with a good grade.

“You’re also busy discriminating against women who have chosen not to have children and they’re childless on their CV because that’s their choice.”

Penny said: “We’re not suggesting that you have to put if you’re a mother or not.”

Janet replied: “I thought you were implying that,” to which Penny said: “No, I never implied that.”

Janet continued: “If you came to me for a job…”

As the pair then started to talk over each other about the topic, Janet said: “Penny, you’re just going to talk no matter what I say.”

Janet cut in: “This is ridiculous. In a debate Penny two people will speak and generally one after the other and they get equal time.

“Not one person puts their point of view and I have to just shut up.”

Penny replied: “That’s never the case with you Janet.”

Viewers spotted the tension between the pair and shared their thoughts on Twitter.

Janet and Penny aren’t even hiding their hatred for each other any more. 😂 #LooseWomen

I must say I thought Penny Lancaster was very rude to Janet Street-Porter just then, blatantly overtalking her. #LooseWomen

One person said: “Janet and Penny aren’t even hiding their hatred for each other any more.”

In addition, another wrote: “I must say I thought Penny Lancaster was very rude to Janet Street-Porter just then, blatantly over-talking her.”

After that, a third added: “‘In a debate Penny usually two people speak’ that’ll be Penny told.”