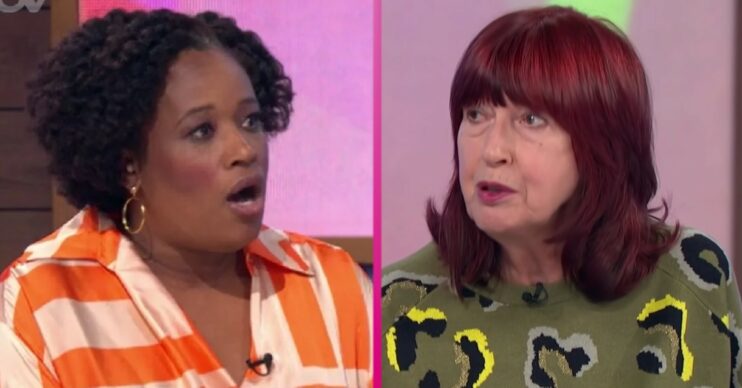 Charlene and Janet clashed over discrimination at Ukrainian borders

Loose Women has been hit with Ofcom complaints following a heated discussion on the ITV show.

On the programme last week, Charlene White and Janet Street-Porter came to blows during a debate on racism at the Ukrainian borders.

The clash even led to Charlene defending herself on Twitter, after some viewers accused her of “playing the race card”.

Loose Women: Why did ITV viewers complain to Ofcom?

The complaints, sent to the broadcasting regulator, centre on Charlene and Janet’s debate on March 1.

During the show, Charlene highlighted how some Ukraine citizens were not allowed to pass borders due to their skin colour.

Read more: Loose Women taken off air most of next week

She said: “It really does shine a light on the fact that it doesn’t matter how devastated someone is, how scared somebody is, it seems like there’s always time for one of the worst traits of society.”

Meanwhile, Janet went on to point out that Poland had “exceeded all expectations in accepting 150,000 refugees”.

Charlene responded: “Oh my goodness! I understand that. But if you have thousands of refugees, you can’t stand there and say oh you 50 people come in, you four people with darker skin sorry.”

Janet said: “This isn’t a surprise for anyone or any asylum seeker who has moved across Europe has met this in Hungary.”

Following the show, Charlene was forced to hit back after being accused of “playing the race card”.

On Twitter, she shared: “For those throwing the phrase, ‘playing the race card’ at me today re @loosewomen… let me be VERY clear.

“You feeling uncomfortable hearing someone talking about race is not my concern, when the concern ought to be directed towards the victims who are subjected to it.”

How many ITV viewers complained?

It has since been confirmed that the show received 213 Ofcom complaints.

According to Ofcom, 180 complaints were related to comments made during a discussion about minority ethic refugees fleeing Ukraine.

Meanwhile, 33 complaints related to a discussion about racism and the Ukraine crisis.

ED! has contacted Loose Women for comment on this story.