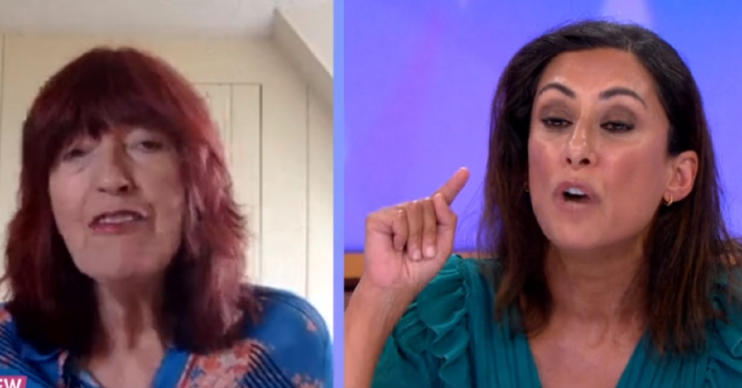 It's got people "hot under the collar"

Presenter Christine Lampard was forced to intervene on Loose Women today when a row about the Dominic Cummings scandal turned into a shouting match.

One of the topics of discussion was the backlash over Boris Johnson’s adviser and his decision to go on a long drive during the lockdown.

What did the Loose Women say?

Linda and Janet appeared to side with Cummings, while Saira slammed him and said she thought he should either apologise or resign.

As the discussion rumbled on, things got heated between Janet – who was speaking via video link from home – and Saira, who was in the studio.

They were talking about Cummings not apologising for what many see as lockdown rulebreaking when Janet said firmly: “You’re projecting your will onto someone who doesn’t see it like that. [An apology] is never going to happen.”

“Well then, he should resign,” Saira said, raising her voice. “Because those are the sorts of leaders I want…”

Janet then interrupted her, shouting: “Maggie Thatcher was a prime minister who never said sorry… Maggie Thatcher, who in so many ways was good for this country and she also had her shortcomings.

Saira then cut her off, storming: “What! To apologise?”

Janet spoke over her, saying: “You might find it uncomfortable…”

At that point, Christine chose to intervene and cut the debate short.

“Ladies, ladies,” she said, trying to calm the situation. “Unfortunately, I have to say sorry and tell you all to be quiet for one moment. Because we do actually have to move on.

“Look, this debate’s rumbling on and it’s got people hot under the collar, obviously.”