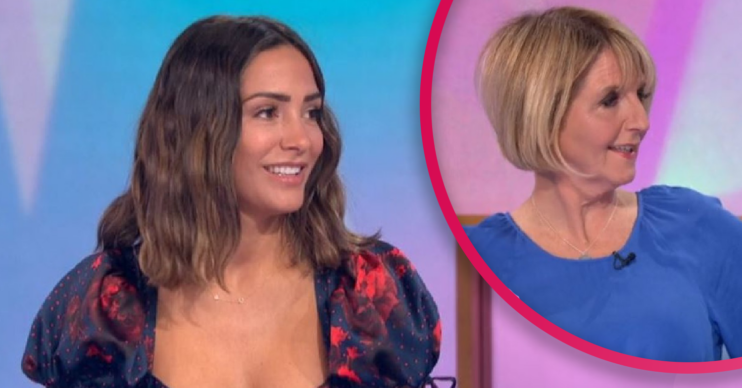 What a beautiful dress!

Frankie wore a navy dress with a pretty red rose print and daring cut out that showed off her midriff.

Fans of the show absolutely loved the dress and begged Frankie to reveal where it was from.

However, Frankie’s fellow panellists did give the star a gently ribbing about the dress, causing Frankie to joke that she was going to walk off set and “leave you old gals” to it!

What happened with Frankie on Loose Women today?

And, as well as admiring glances from viewers at home, it also caught the eye of her fellow panellists.

After the first ad break, Kaye turned to Frankie, touching her midriff.

“Do you know what Frankie, I cannot believe that you managed to get to wardrobe first and get that dress,” Kaye said.

“I was going to wear that,” she said, gently mocking the star.

Do you know what Frankie, I cannot believe that you managed to get to wardrobe first and get that dress.

“You’ve got a real issue with my outfit today,” Frankie countered.

“I think it would look better on me, don’t you think?” Kaye teased.

“You’d have worn it better Kaye, for sure,” Nadia chipped in.

“I’ll just leave now and you old gals can have a great time together,” she said, taking their teasing in good humour.

The same, however, can’t be said for Loose Women fans watching at home.

“That looked awkward,” declared one after the comments.

“Why aren’t u commenting on anyone else’s outfit Kaye?? You look beautiful Frankie,” they reassured the star.

Another viewer commented: “I can’t deal with how patronising the women on Loose Women are to Frankie. She’s literally got two kids – stop acting like she’s 12.”

Where can I get Frankie’s Loose Women dress?

Other viewers all had a similar question for Frankie, one that just happens to be on our lips, too.

Where is the dress from?!

“@FrankieBridge looks amazing in that dress on #LooseWomen today,” commented one.

“Where would I find that beautiful dress @FrankieBridge wore on today’s show?” asked another.

ED! got in touch with Frankie’s stylist, who let us in on the star’s style secrets.

However, it’s bad news for anyone wanting Frankie’s exact dress…

But the gorgeous satin midi tea dress with twist front is sadly sold out in Frankie’s colourway.

Limited sizes are available though in red spotted and sky blue.

Frankie’s stylist told us: “Run, don’t walk – it sold out so fast!”

Head to our Facebook page @EntertainmentDailyFix and tell us what you thought of Frankie’s dress on Loose Women today.