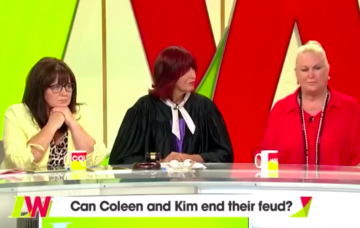 TV watchdog Ofcom have reportedly ruled on the furious row between Coleen Nolan and Kim Woodburn last year, finding in favour of the ITV lunchtime show.

Kim and Coleen fell out during Celebrity Big Brother in 2017 and clashed again when they were reunited on Loose Women last year.

Kim ended up walking off set in tears and Coleen was branded a “bully” on social media, an allegation she vehemently denied.

Now, according to The Sun, Ofcom has ruled that the show did not breach TV’s rules.

They reportedly say that Kim, 76, was “also aggressive and defended herself at all times” despite being obviously upset.

The news divided fans, with one insisting: “The right result I think, I watched that show and it was Kim who did all the shouting and yelling and I will never understand why Coleen got most of the blame when she hardly said a word.”

Others were upset with the decision, with one commenting: “It was vile TV and the fact that the vile bully is back on @loosewomen is proof that @ITV have learnt nothing.”

The incident last August shocked viewers when the How Clean Is Your House? star appeared on the show to resolve a long-standing feud with regular panellist Coleen after their falling out the year before.

Sadly, the conversation quickly deteriorated into a shouting match, as Kim said: “I had a very, very sad childhood. I had a brutal childhood.”

Coleen could be heard whispering: “We got this every day as well. She’s going to cry in a minute.”

Kim later stormed off the set, saying: “I wouldn’t want to sit and talk with lying trash. She’s a horrible person. You are trash, you’re a piece of filth.”

The aftermath saw more than 25,000 people sign a petition that demanded the former singer be sacked from Loose Women, as well as nearly 8k complaints to Ofcom.

Coleen took a break from the show, and cancelled her solo tour.

She also insisted to the Mirror: “Anyone that knows me knows I’m not a bully. That would be the most hurtful thing people could call me.

“From the moment she arrived, it was clear Kim didn’t want to make up. Now I wish I could go back in time and not do it. It was ugly, upsetting and unpleasant for everyone.”

Coleen returned to the panel in December, where she’s been a regular since 2000.

And just last month, she opened up about the awful attacks she faced from trolls after the row.

Do you think Ofcom have made the right decision? Leave us a comment on our Facebook page @EntertainmentDailyFix and let us know what you think.