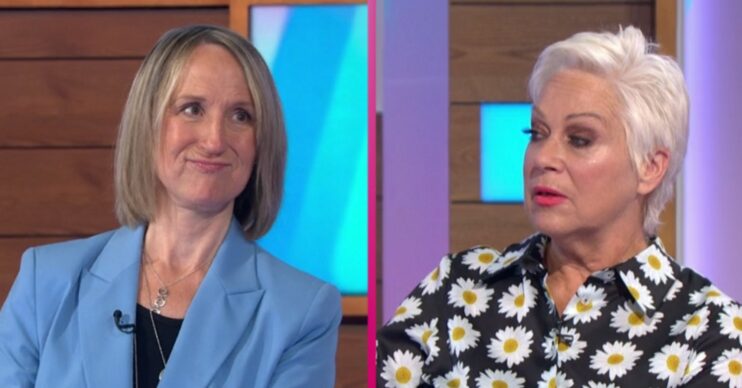 Things got heated between the pair as they discussed whether they think hangover-free alcohol is a good idea.

What happened on Loose Women?

During today’s episode of Loose Women, Charlene, Carol, Denise, and Katie Piper discussed whether hangover-free alcohol was a good idea.

“Scientists reckon that we’re about two years away from having synthetic alcohol that has no ill after-effects,” she said. “So it doesn’t give you a hangover, basically.”

Charlene then asked Carol whether she thought it was a good idea, to which Carol replied “no”.

“Actually I quite like being drunk and I like having a hangover,” Carol said. This caused Denise to burst out laughing.

“You like having a hangover?” Katie asked. “Yes, because it gives me a chance to do nothing,” Carol said.

“What, like every day then?” Denise snorted. Carol then turned on her co-panelist and told her off.

“Oh, don’t you start, ooh the booze police,” she snapped.

Denise was quick to deny being the so-called ‘Booze Police’. However, she said that if Carol had worse hangovers, then maybe it would stop her from drinking so much.

“Well, then maybe Denise, I don’t drink as much as you think I do,” Carol replied. “I don’t get that bad hangovers and I know how to deal with them.”

Carol then said that she doesn’t want to stop drinking because she does “quite like it”.

“I do it purely for social reasons,” she explained. “I don’t sit at home with a bottle of wine drinking on my own, I never do that!”

Denise then spoke about how it has been ten years since she last had a drink, drawing a round of applause from the panel.

“Your relationship with booze was completely different to mine,” Carol said, to which Denise agreed with her.

“My relationship with drink was very destructive,” she said.

Carol was quick to try and lighten the mood after Denise spoke about how she gave up alcohol, but it didn’t seem to work.

“I hope I never get like that because I love wine,” she said. “I don’t really like soft drinks, that’s the truth.”

“But if you got as down and destructive as me, you would stop,” Denise snapped. “I think you should drink less.”

Carol then acknowledged that she drinks “too much”. She said the government says she should only drink “14 units” but she irritably reiterated that she doesn’t get “terrible hangovers” or “get depressed” when she drinks excessively.

Denise then explained that her primary concern was for her friend’s health. She pointed out that Carol had had breast cancer in the past, so she shouldn’t drink so much because of that.

She said: “I worry about that from a health point of view.”

“You’ve got to take chances in life!” Carol yelled as Charlene intervened.

“Take a breath, ladies, take a breath,” Charlene said just as the show headed into a commercial break, bringing the clash to a close.