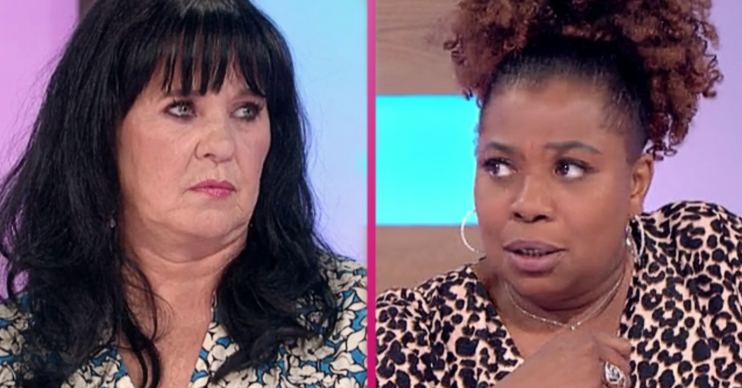 Brenda took it in good spirits

Not only did she brand Janet Street-Porter “rude” but she also said the same thing about Brenda Edwards, too.

In a segment the panel discussed whether people earned the right to be rude as they got older, and the difference between being rude and being direct.

And then she launched into Brenda.

Turning to Brenda, Coleen said: “I am training Brenda because she is very direct but it comes across as rude.”

Brenda feigned open-mouthed surprise, and Coleen continued: “I don’t want people to walk away and go ‘she wasn’t very nice’ because she’s the nicest person I know.

“But sometimes she comes across as so direct you could leave a bad impression on people.”

What else did Coleen say?

Brenda had time to answer the accusation.

“No, it’s your volume and your face,” Coleen replied bluntly.

No, it’s your volume and your face.

When host Kaye Adams asked Brenda if it offends her when people think she’s rude, she said: “It upsets me if I have offended [someone] and it wasn’t my intent.

“I’m a passionate person and this is how I talk. And if you come while I’m talking… I’m not being rude I’m just an enthusiastic woman.”

“No!” shouted Coleen. “You just have to say it nicely.”

Viewers thought Coleen was out of order.

One wrote on Twitter: “OMG Coleen, think about yourself, lots of times on #LOOSEWOMEN, you’ve been rude to some of the panellists & to the guests.”

Another said: “#LooseWomen watching today’s show and disgusted with Coleen’s view about how Janet is rude, if it was the other way round Coleen would walk off.”

A third commented: “Did I jus hear Colleen calling Brenda rude because of her face & how she talks? #loosewomen.”

Finally, one viewer wrote: “Coleen will be lucky if she doesn’t catch a slap at the end of today’s show #LooseWomen.”

However, after the show went to a break, the ladies appeared to have smoothed things over.

As the rest of the show continued, they were seen laughing and joking with each other.