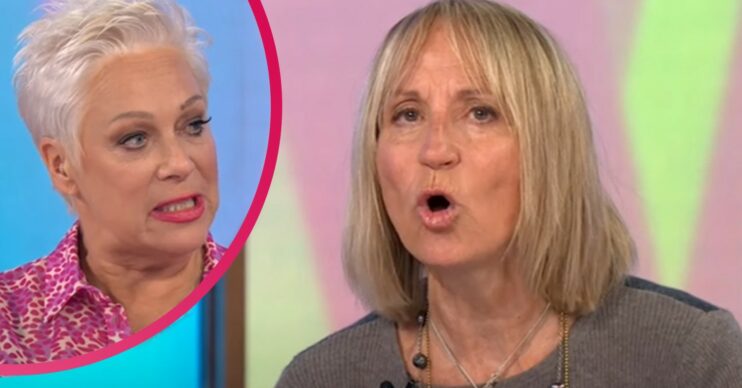 The pair had a "heated" debate on the royals

On Thursday’s show, the panel discussed reports that the Queen had paid an alleged £2million to Virginia Giuffre’s charity as part of her son’s out of court settlement.

Ms Giuffre had accused Andrew of sexually assaulting her when she was 17 – something he’s always denied.

However, they have now settled a US civil case with Andrew agreeing to pay an undisclosed sum to Giuffre’s charity, which is in support of victims’ rights.

What happened between Carol and Denise on Loose Women?

The panel discussed whether the public has a “right to know” where the rest of the settlement money would be coming from.

Reports claim Andrew is paying £12million to the charity.

Denise said: “Where that money comes from, I don’t really care.”

The star then brought Prince Harry into the discussion.

Denise continued: “Prince Harry is constantly berated, challenged, criticised for bringing burden of heartache onto the Queen in her later years.

“And yet here is the Queen bailing Andrew out of this situation.”

Carol said: “It’s not about Harry, we’re not talking about Harry are we?”

However, Denise said: “I’m talking about how the media still blame Harry for absolutely everything and seem to divert their attention away from Andrew.”

Kaye Adams then asked Carol whether she thinks this latest Andrew news will “diminish trust in the royal family”.

Carol said: “Why do we have to trust them? They’re the royal family. I just want them to be there, I don’t care.

“The point is we do not know. The speculation that surrounds the royal family is rife, it always has been.”

“We don’t even know it’s twelve million do we?”

Denise asked: “Do you think Andrew should be stripped of his titles, are you bothered about that?”

Denise cut in: “He went to visit Jeffrey Epstein…”

However, Carol replied: “Everyone went to visit bloody Epstein. There’s a book, have you not seen the book? Have you seen the book?!”

The pair then spoke over each other, before Kaye stepped in and calmed things down.

Viewers watching shared their thoughts on Twitter, with many siding with Denise.

One said: “Ugh Carol not caring what the Royal Family do, unless it’s Harry of course. Well said Denise.”

Another wrote: “For once I totally agree with Denise!! They keep shutting her down – let her talk.”

A third added: “Sorry Carol but I would like to know who is footing the bill for Prince Andrew.”

However, others agreed with Carol.

One tweeted: “Completely agree with Carol. Couldn’t give a [bleep]. We know NOTHING!”