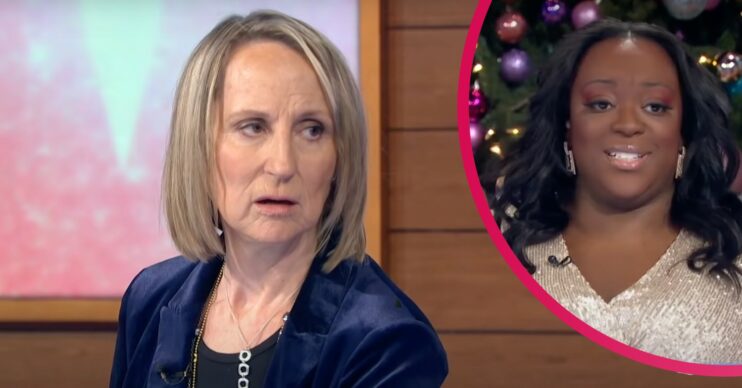 Another day, another controversial COVID debate

Loose Women star Carol McGiffin has been slammed online after she branded Brits “soft” for cancelling their Christmas plans.

Carol’s comments came during today’s episode of Loose Women, leaving many fans baffled, and some accusing the 61-year-old of being “irresponsible”.

On today’s episode of Loose Women (Thursday, December 16), the panellists discussed whether they would be cancelling their Christmas plans this year.

This particular discussion comes during a period where Omicron Covid cases are on the rise in the UK.

When Kaye Adams asked Carol, hypothetically, if she invited her round to her house for Christmas, would she take a test, Carol said no.

She continued, saying: “Well, I respect that you don’t trust me to come to your house even though I’m not ill, without having to prove that I’m not ill.

“Where does it end?” the 61-year-old snapped. “What other illnesses do you want know that I’ve got or haven’t got?”

She said: “I find it quite breathtaking actually that Boris stands there and goes ‘Well, we’re not cancelling anything but here’s a load of scary numbers’, and everyone goes and cancels anything anyway.”

What else did Carol McGiffin say?

The Loose Women panellist then bemoaned the fact that many “great Christmas plans” have been cancelled now because of the variant.

However, Carol doesn’t think people are scared of Omicron, she thinks they’re more worried about getting a positive test and having to go into isolation.

“I am not cancelling anything,” Carol later declared towards the end of the debate. “In fact, I’m gonna go out every single night until everything shuts down, which I’m sure it probably will.

“And, do you know the best thing about is, being in London I can now suddenly get into a load of restaurants that I couldn’t get into before,” she continued. “Because, you know, soft people are just cancelling left, right, and centre.”

What did viewers say about Carol McGiffin’s comments?

Many viewers of the show were less than impressed with Carol McGiffin’s comments on the show today. The presenter’s comment about “soft people” rubbed many up the wrong way too.

“How dare Carol label people soft if they don’t want to put their selves needlessly at risk because of people like her,” a third viewer tweeted.

“Carol is a summary of what is wrong with this country. Absolutely irresponsible and should not be given airtime,” another viewer said.

Loose Women airs every weekday at 12:30pm on ITV and ITV Hub.

What did you think of Carol McGiffin’s comments? Head to our Facebook page @EntertainmentDailyFix and let us know!