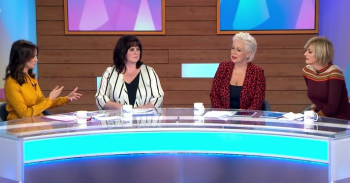 Loose Women cancelled due to Cheltenham races this week

Viewers won't be able to get their daily dose of gossip

Loose Women has been given the chop for the rest of the week to make way for the coverage of the Cheltenham races.

The panel show, which airs daily on weekdays at 12.30pm on ITV, will be replaced by the horse-racing programme temporarily.

Loose Women fans had their last chance to get their fix from Monday’s show.

The 49-year-old presenter told those watching: “And that’s it from us for the rest off the week I’m afraid, we’re off because of the races.”

The Cheltenham event is one of the largest in the racing calendar and it will take place over four days as of Tuesday.

There will be seven horse races a day at the Gloucestershire course so there is a lot that needs covering and Loose Women was the show that was chosen to make way.

Racing coverage will begin from 1pm – in the middle of Loose Women’s usual slot.

A similar set-up happened last year, and Loose Women was taken off air for seven days for the races. At the time, viewers said they were “fuming”.

At least today’s show went out on a high.

Presenter Mark, 32, was on the show to talk about his return to the UK to host new dating series The Bachelor.

Meanwhile, Love Island’s Wes, 20, opened up on all things DOI and confessed that he wants to be “civil” with ex-girlfriend Megan Barton Hanson.

What do you think of the Loose Women change-up? Leave us a comment on our Facebook page @EntertainmentDailyFix and let us know.