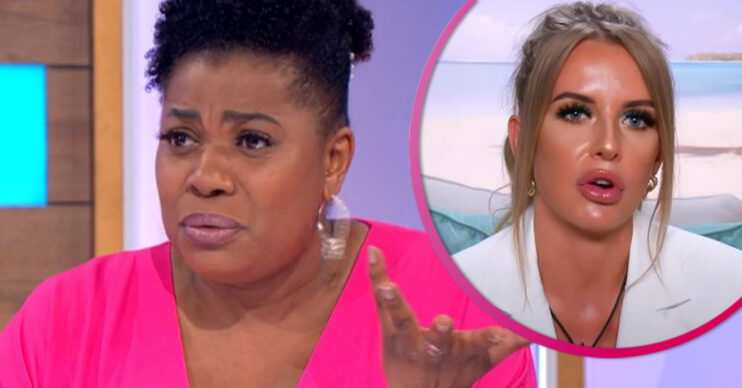 Others agreed with Brenda's comments

On Wednesday’s show, the panel were discussing an episode of the ITV2 reality show in which Faye and Sharon Gaffka called out fellow Islander Hugo Hammond for saying he wasn’t into “fake” girls.

After a clip played of Faye speaking about being gifted a boob job by her parents at 18 due to an insecurity she had, Brenda and her panellists shared their thoughts.

What did Brenda say on Loose Women?

Brenda said: “She’s saying about the word fake… it’s one thing having the boobs but the lips too? What’s that? Anyway…”

Read more: Love Island Hugo’s ‘fake’ comments to Faye and Sharon – who was in the wrong? Harley Street expert wades in on debacle

Kaye Adams asked: “But that’s her choice, do we judge people’s choices?”

Brenda continued: “It’s like come on. I know about the insecurities, I’ve had insecurities. When I was at school I was very flat chested up until the age of 13/14.

“Everybody else had their bras, I didn’t have one. I used to take tissues and pad my bra because everyone would make fun.

“I think it’s more important as a parent to go back to how I felt and support my child and tell my child that they’re beautiful and if they’ve got some concerns it’s for me to try and help them to get over those things.”

Kaye asked: “So you would never consider paying for the plastic surgery?”

Brenda said: “No, unless there was a medical reason why you need to have that. It’s mind over matter.

“I would try my best to help my child get through that.”

One person said: “Brenda that’s terrible! Wow the fact that you laughed at a woman who has no self esteem so she gets her lips done to make herself feel better who are you to judge?

“If it makes her happy then who cares???”

Totally think it’s out of order for Brenda to comment on Faye’s lips like that, it’s her choice! #LooseWomen

Another wrote: “Totally think it’s out of order for Brenda to comment on Faye’s lips like that, it’s her choice!”

One added: “So off for them both [Brenda and Janet Street Porter] to laugh at Faye for having insecurities.

“Whatever their view is on plastic surgery, you don’t laugh at someone when they express a childhood insecurity.”

However, others agreed with Brenda’s comments.

One tweeted, “Just love Brenda’s down to earth logic,” while another added: “Brenda [applaud emoji], changing something physical is a short term solution.”

ED! has contacted reps for Loose Women for comment.

What do you think? Tell us your thoughts on our Facebook page @EntertainmentDailyFix.