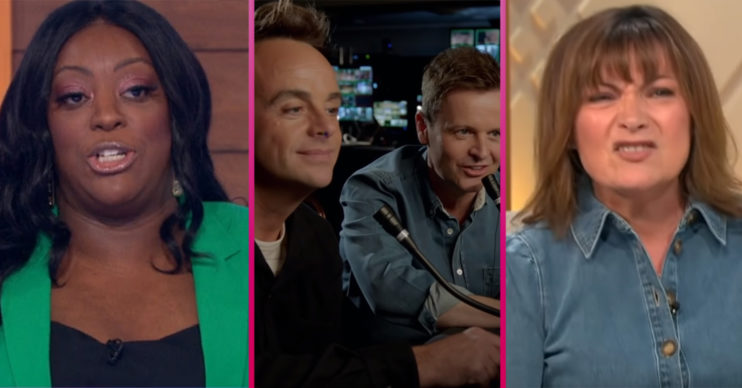 Loose Women star Judi Love screamed over a spider on today’s show and ITV viewers are convinced Ant and Dec were behind it.

It started with Monday’s Lorraine, when the host’s interview with rapper KSI was branded bizarre.

During the chat, viewers picked up on her behaviour which ranged from complaining about a fly to suffering from cramp.

It left many people convinced Saturday Night Takeaway hosts Ant and Dec were behind the antics for their Get Out Of Me Ear segment.

The prank sees the duo give a celebrity instructions to do via an earpiece.

Later on, more strange behaviour got viewers talking during This Morning with Holly Willoughby and Phillip Schofield.

Chef James Martin was on the show to make chocolate and hazelnut choux buns.

However, a string of bizarre things happened including Phil getting a cramp in his arm and Holly beatboxing in time with the electric whisker.

At one point, the pair even appeared to make a dig at James’ food with Holly saying: “I’m not being rude but it does taste better than it looks.”

Viewers branded the pair “rude”, while others became convinced it was once again Ant and Dec instructing them on what to say.

One said on Twitter: “Ant & Dec were definitely in their ears.”

Meanwhile, on Loose Women, comedian Judi freaked out when she spotted a spider on set.

In addition, the panellists claimed a weird smell was in the studio.

ITV viewers are now convinced Ant and Dec have been behind all the strange antics today.

The weirdness that has been going on across ITV daytime today, Ant & Dec are definitely all over it for SNT #lorraine #thismorning #loosewomen #saturdaynighttakeaway

Ant & Dec have definitely been directing #lorraine, #thismorning and #loosewomen

One person said on Twitter: “The weirdness that has been going on across ITV daytime today, Ant & Dec are definitely all over it for SNT.”

Another wrote: “ITV daytime seems very weird today. What’s going on? It has Ant & Dec written all over it.”

A third tweeted: “Ant & Dec have definitely been directing #lorraine, #thismorning and #loosewomen.”

Do you think Ant and Dec are behind the behaviours today? Head to our Facebook page @EntertainmentDailyFix and tell us.