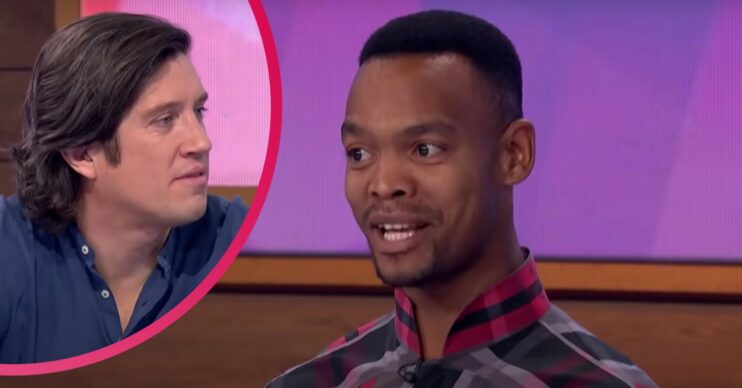 Vernon Kay returns as host, too

Loose Men will return to ITV later this week as Loose Women rebrands for a men’s mental health special.

The most recent Loose Men aired in November 2021. And Vernon Kay, who hosted that episode will return to anchor again.

But Strictly Come Dancing favourite Johannes Radebe will make his debut on the panel, even though he has appeared on the programme as a guest more than once before.

Johannes has previously appeared alongside then-dance partner Catherine Tyldesley a couple of years ago.

But his most recent guest showing came only a few weeks ago, back in April, as he promoted his solo tour Freedom.

He certainly proved to a hit during that appearance, with one fan tweeting: “Oh my word, why can’t everyone in the world be as beautiful and kind a human as this human? Put a smile on my face.”

Nonetheless, as a panellist, Johannes is a newbie. But we can’t imagine he’ll be anything but a hit in his role.

He’s admitted he’s “thrilled” to have access to “a platform to sit as men and talk about issues affecting our wellbeing and livelihoods”.

The Loose Men are back!

Watch on Thursday at 12:30 📺 @ITV pic.twitter.com/wwotrniHuq

The other panellists have both featured on Loose Men before. Radio presenter Roman Kemp appeared on the first special in November 2020.

Vernon admitted he hoped the show can be as instructive for viewers as it has been for him.

He said: “I’m really excited to be back for another Loose Men special. Men’s mental health is so important to me.

“I learnt things from the panel members last time that I’d never known before.”

Encouraging men to talk is really important to me.

Similarly, Roman hopes the show may inspire male viewers with opening up.

“To help shine a light on the struggles men face with mental health, open up the conversation and encourage men to talk is really important to me,” he said.

“A simple question to a mate can go a long way.”

And Mike noted how he felt previous Loose Men show have had an impact.

He revealed: “I received lots of messages from people who watched the show the last time the men headed up the panel, saying that us talking so openly about our experiences helped them.

“I’m really glad if we can do even a little bit in raising awareness and normalising the subject of men’s mental health each time we do this.”