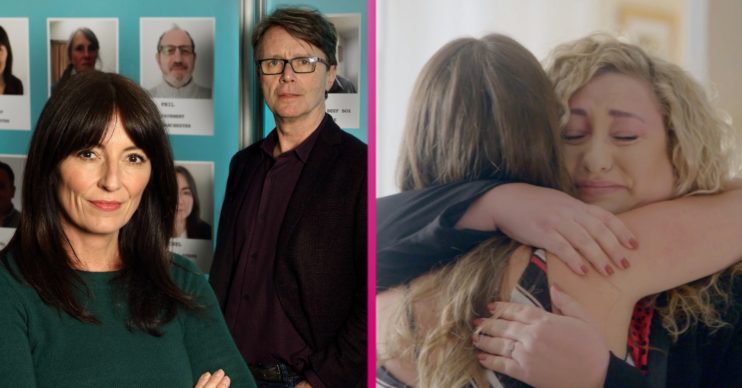 Long Lost Family: Born Without Trace returns – How can I apply and what are the stories?

Long Lost Family: Born Without Trace returns for a new three-part series this week, so how can you apply to be on the show?

Davina McCall and Nicky Campbell share more stories of people who were tragically abandoned as babies.

The presenters help them try to find their birth families and know their identities.

Read more: Is Davina McCall in a relationship and why did the Sex, Myths and Menopause host divorce Matthew Robertson?

Long Lost Family: Born Without Trace on ITV1 – how many episodes?

There are more reunions on Tuesday and Wednesday in this three-part series.

On Thursday (May 27 2021), Davina McCall and Nicky Campbell present Long Lost Family: What Happened Next?

Viewers will discover what happened to some of the series’ previous participants.

Davina and Nicky investigate the case of two baby girls abandoned in Chesterfield in the late 1980s.

Could they be related?

Their respective parents abandoned them both in Chesterfield, 18 months apart.

Foundling Helen was abandoned in a box outside a hospital on a cold, frosty morning in December 1988.

She was just a few hours old.

Her parents saw her story on the local news and agreed to adopt her.

However, with the help of DNA, the investigative team make a shocking new discovery.

Read more: Nicky Campbell’s wife feared he would ‘jump in front of train’ before bipolar diagnosis

Marguerite Huggett, now 74, was left on a luggage rack of a train in Paddington station just after World War Two.

She believes she’s reached her last chance of finding anyone alive who might be able to tell her anything about her beginnings.

With nothing to go on and no names on her birth certificate, she wonders if her father could have been a soldier passing through London after the war…

She says: “It’s knowing the reason that I was abandoned, that’s the drive to find my birth parents.”

By placing her DNA on an online database that traces birth relatives, and following a three-year investigation of the initial matches, the search team remarkably discovers the identity of both her birth mother and her birth father…

Viewers also meet Rachel Selby, a young foundling left by a church in Liverpool in 1987.

For the first time, she returns and meets the priest living next door.

He reveals she was found on the doorstep of his Presbytery and he believes her mother must have known him and his church.

Rachel explains: “I need to know the truth, it’s still this burning desire.

“Everybody deserves to know their identity.”

Incredibly, through DNA, Rachel discovers who one of her birth parents is – who didn’t even know she existed.

Sarah Dunkley’s mother disappeared without a trace from the hospital after giving birth.

In episode three, Sarah reveals how her mother gave a false name and false addresses on the hospital records.

DNA reveals an unbelievable connection for Sarah to a full sibling – a sister who was also left in a hospital by a woman who left a false identity.

Not only do the pair find one other but, with further detective work, the search unveils the identity of both of their parents and the story behind their abandonment.

Meanwhile, Steve’s parents abandoned him in public toilets near a football stadium in Wolverhampton.

How do I apply for Long Lost Family?

If you have been separated from members of your family and want to be reunited with them, you can contact Wall to Wall media, the production company behind Long Lost Family.

The programme aims to track down lost relatives, from the search through to the reunion.

If you are looking for a relative and would like to apply to be on the programme, please complete the application form on their official website.

You can find it by clicking here.

You’ll need to read the terms and conditions, and fill in your name, age and address.

They’ll also ask you to explain who you are looking for, and what are the circumstances around your estrangement.

If you are applying, then ED! wishes you the best of luck!