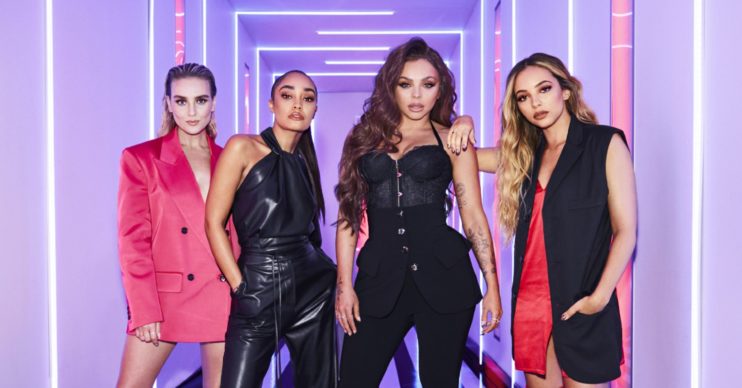 The BBC confirmed the shock news in a statement

Little Mix have been forced to postpone their debut live show of The Search following a coronavirus outbreak on set.

The BBC show, which sees Perrie Edwards, Jade Thirlwall, Jesy Nelson and Leigh-Anne Pinnock on the hunt for a new talent to join them on tour, has previously aired pre-recorded episodes.

However, production has since came to a halt after a “small number” of crew members have tested positive for COVID-19.

Read more: Me, My Brother and Our Balls: Chris Hughes feels his sperm is ‘wasted’ after split from Jesy Nelson

Announcing the news, the BBC said in a statement: “We can confirm that a small number of people on the Little Mix The Search production have tested positive for coronavirus and they are now self-isolating following the latest government guidelines.

“Due to the format of the show we have made the decision to postpone Saturday’s programme.

“There are rigorous protocols in place to manage Covid-19 as the safety of all those involved in the production is paramount.”

They concluded: “We hope to be back on air on Saturday 24 October.”

What is The Search?

The talent show sees girl group Little Mix looking for a band to support them on their next tour.

During the live shows, viewers were expected to see the acts compete against each other.

One viewer tweeted: “Caught up with #LittleMixTheSearch and much like @Louis_Tomlinson when he was a judge on XF, the @LittleMix ladies were honest, compassionate and empathetic judges when watching auditions. This is something every other talent show should take note of. Fantastic show!”

What else have Little Mix been up to?

The new couple have reportedly been seeing each other ever since Jesy split from Love Island star Chris Hughes.

Earlier this month, the singer shared a picture of herself cuddling up to the Our Girl star on Instagram.

She captioned the adorable post: “Everything” and added a heart emoji.